TEHRAN, May 28, YJC - Hujjat al-Islam Sayyed Mofid Husseini Kouhsari and his accompanying delegation paid a visit to the Islamic University of Lebanon; "Today, the enemies of Islam are spending billions of dollars to undermine the unity of Islamic Ummah." said the Iranian cleric. 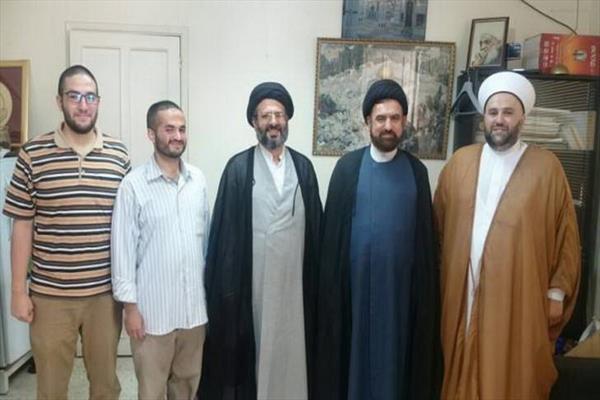 TEHRAN, Young Journalists Club (YJC) - Hujjat al-Islam Sayyed Mofid Husseini Kouhsari, head of the Islamic Seminaries' Office for International Relations, along with a group of seminary clerics paid a visit to the Islamic University of Lebanon on Friday, May 26.

During the meeting, Sheikh Abdullah al-Jabri, Secretary General of Lebanese al Ummah Movement, stressed the importance of the issue of Occupied Palestine and said, "there are presently two perspectives among Muslims regarding the issue of Palestine; some countries insist on the Palestinian cause and the resistance against the Zionist regime and believe that Palestine should be freed completely whereas some other countries are publicly engaged in ties and negotiations with Israeli regime."

Elsewhere in his remarks, the Lebanese cleric urged developing scientific and cultural activities in order to combat ISIS terrorists in the region saying, "If the Muslim youth and the Islamic community in general were more educated and informed, the terrorists and extremists were not able to deceive people and divert Muslims' attention from Palestinian cause."

At the end of the meeting, Hujjat al-Islam Husseini Kouhsari touched on the issue of Palestine and asserted, "The Islamic Republic of Iran will not abandon the issue of Palestine since it is considered as the core issue in Islam and we will face all challenges and pressures that may come along."
Source: Hawzah News Agency
Share to
Tags
Iranian Cleric ، Kouhsari ، University of Lebanon
Your Comment