Ayatollah Khamenei: Terror attacks will fail to undermine Iran’s will 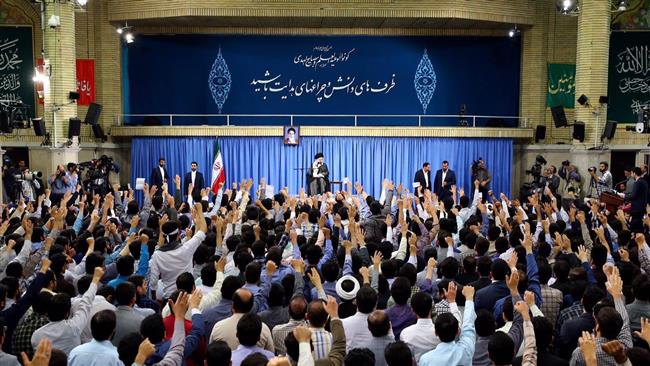 TEHRAN, Young Journalists Club (YJC) - "The Iranian nation is moving forward. These fireworks that happened today will have no impact on the people’s resolve. They are too weak to affect the will of the Iranian nation and that of the officials,” the Leader said in a meeting with university students in Tehran on Wednesday, several hours after two Daesh terrorist attacks were carried out in the capital.
The Leader said had Iran not stood against the hotspot of terrorism in the region, the country would have faced more severe problems.
Ayatollah Khamenei also expressed optimism that terrorists "will be uprooted, God willing."
Earlier on Wednesday, gunmen stormed Iran’s Parliament (Majlis) and the mausoleum of the late founder of the Islamic Republic Imam Khomeini in two coordinated attacks, which claimed the lives of 12 people and injured over 40 others.
"The terrorist attacks in Iran have shown today’s generation and the people of Tehran what an act of terror and terrorism are and how terrorists target innocent people,” he added.
Noting that Iran will not lose hope over Wednesday’s incidents, Ayatollah Khamenei stressed that if losing hope was an option the people would have done so during Iraq’s imposed war on Iran.
The Leader also stressed that the Islamic Revolution’s stand against the global hegemonic system has given its identity.
Ayatollah Khamenei also advised students to put themselves in the front lines of Iran’s fight against the global domineering system and to assume a human, national, Islamic and international responsibility to this end.
Broaching on the topic of the UN’s Education 2030 agenda, the Leader stressed that by no means is it acceptable for a country’s education system to be dictated by a foreign body.
"Even if some parts of it were not openly against Islam, a nation’s education system must not be written outside the country,” he said.
On May 7, the Leader said the document had been prepared under the influence of world powers.
Iran signed the document in 2016, but Ayatollah Khamenei said the Islamic Republic will not submit to it.
"A hushed signing and implementation of this document is definitely not permissible and the related bodies have been notified of that," the Leader said.
Iran's education planners say the UNESCO document is not in tune with the country's educational standards, adopted by the Supreme Council of the Cultural Revolution.
They have warned that submitting to the UNESCO agenda would require Iran to share its educational information which could end up in wrong hands.