TEHRAN, June 8, YJC - Turkey's parliament approves a measure to deploy troops to a Turkish military base in Qatar amid a widening rift between the Arab country and neighbors in the Persian Gulf region. 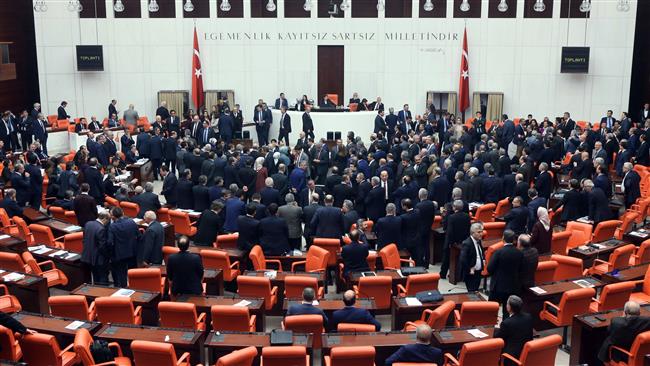 TEHRAN, Young Journalists Club (YJC) - The parliament approved the deployment on Wednesday with 240 lawmakers in favor, most of them from the ruling party of President Recep Tayyip Erdogan.
The deployment had been drafted before a spat surfaced between Qatar and three main allies in the Persian Gulf, namely Saudi Arabia, the United Arab Emirates and Bahrain. The three countries, plus Egypt and the Maldives, have cut ties with Doha over what they call Qatar’s support for terrorism. Qatar has denied the allegation.
However, the debate on the legislation was moved up the agenda of the Turkish parliament while a separate bill was introduced to the chamber on increased military cooperation between Turkey and Qatar, Presstv reported.
Turkey, which initially moved to mediate between the Arab countries, has declared its support for Qatar, rejecting claims that the country is financing terrorism.
Erdogan said on Tuesday that Qatar was a leading force in the regional fight against terror and criticized others for pursuing the policy of isolating the oil-rich country. He even hailed Qatar for a "cool-headed and constructive” stance in dealing with regional issues.
The vote in the Turkish parliament on Wednesday would be a fresh sign that Turkey is supporting Qatar in the dispute with the Saudis and allies.
Erdogan and other Turkish officials have said that they will continue efforts to resolve the dispute.
Turkey and Qatar signed an agreement in 2014 which allowed the construction of a Turkish base in Qatar. Officials say up to 3,000 Turkish troops could be deployed in Qatar as part of Ankara’s program to increase its military cooperation with Doha.