TEHRAN, February 4 - The Supreme Court in the Maldives is trying to impeach President Abdulla Yameen for not obeying its order to release jailed opposition leaders, the attorney general said on Sunday, warning of further instability in the Indian Ocean nation. 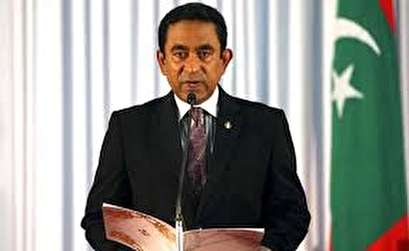 TEHRAN, Young Journalists Club (YJC) - The Supreme Court in the Maldives is trying to impeach President Abdulla Yameen for not obeying its order to release jailed opposition leaders, the attorney general said on Sunday, warning of further instability in the Indian Ocean nation.

The Maldives, best known for its luxury resorts, has been in a fresh political crisis since the top court threw out terrorism convictions last week against former president Mohamed Nasheed and others who have been trying to oust the president for years.

Yameen has faced calls at home, and from the United States and India, among other nations, to heed the court decision on Nasheed, the island’s first democratically elected president, and the others, but has dug in his heels so far.

Home to about 400,000 people, the Maldives has also been drawn into a regionwide tussle for influence between India - with which it has long-standing political and security ties - and China, which opened an embassy in 2011 and has offered technical and financial assistance to build infrastructure.

Attorney General Mohamed Anil said the government had received information the Supreme Court was preparing to fire Yameen, but such a move would be illegal and resisted by government law enforcement authorities.

“We have received information that things might happen that will lead to a national security crisis,” Anil told reporters in the capital, Male.

“The information says the Supreme Court might issue a ruling to impeach or remove the president from power,” he said, adding that government bodies had been given instructions not to carry out such an order.

Riot police stood guard outside government offices in Male and the Republic Square, a site of protests by opposition activists.

The combined opposition said it feared a military takeover of the islands to preserve Yameen’s grip on power.

“The intimidation of the Supreme Court justices, with the highly irregular statement made by the attorney general defying the Supreme Court, supported by the two chiefs of the security forces, is tantamount to the effective sidelining of the judiciary and in direct contravention of the constitution,” it said in a statement.

“Maldivians are fearful that President Yameen is about to order a full military takeover of the country, in an attempt to ensure he is not removed from office.”

The crisis poses the biggest threat to Yameen’s control of the Maldives since he took power in 2013, defeating Nasheed in an election the latter’s supporters say was rigged.

Yameen has stopped short of saying he will not obey the court order. He told a party meeting on Saturday he “did not expect the Supreme Court ruling at all”.

Critics of the government continued to face pressure. On Sunday, police raided the home of Hassan Saeed, the head of the judicial administration department, which the opposition said was considering a corruption investigation into Yameen.

Police said in a statement they were looking to arrest Saeed over an investigation into apartment purchases.

The political drama in the Maldives, which is made up of 26 coral atolls and 1,192 individual islands, centres on tiny, densely populated Male, the base of all its major institutions.

Besides political wrangling, the largely Muslim island chain is grappling with problems such as significant numbers of radicalised youth who enlisted to fight for the Islamic State militant group in the Middle East.