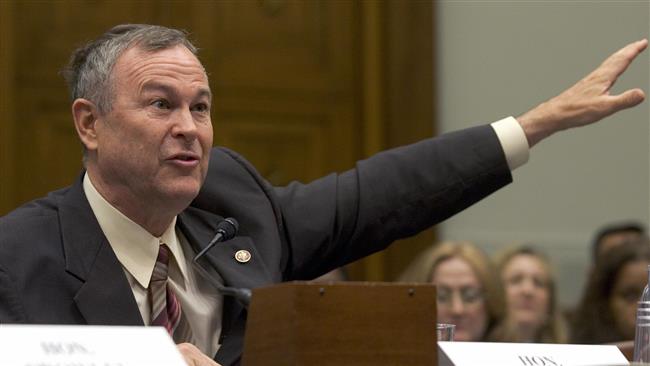 TEHRAN, Young Journalists Club (YJC) - Republican Congressman Dana Rohrabacher, 69, who is a member of the US House of Representatives representing California's 48th congressional district, made the provocative remarks on Thursday, during a House Foreign Affairs Committee hearing on Lebanon's Hezbollah resistance movement.
Rohrabacher, while apparently hailing the deadly attacks as a positive development, said he believed that the terror attacks were conducted by "Sunni forces," which he said had to be provoked to stage attacks in Iran.
"Isn't it a good thing for us to have the United States finally backing up Sunnis who will attack Hezbollah and the Shia threat? Isn't that a good thing?" he asked, adding that the attacks could be "a signal, a ratcheting up of certain commitments by the US” against Iran.
Rohrabacher's comments came a day after several gunmen stormed Iran’s parliament and the Mausoleum of Imam Khomeini in two coordinated attacks. At least 17 people lost their lives and nearly 50 others were wounded in the assaults, which involved shootings and blasts. Daesh claimed responsibility for the near-simultaneous assaults.
"If this is so, may be this is a Trump's strategy of actually supporting one group against another, considering that you have two terrorist organizations," he further said.
Resorting to history, Rohrabacher even implied that he advocated the idea of teaming up with Daesh to battle Iran, asserting that even though Joseph Stalin was a "horrible guy,” US leaders cooperated with him in defeating Adolf Hitler and the Nazi Germany.
"Maybe we should consider having" Daesh on the one hand, and Iran and Hezbollah on the other, "fighting each other," he concluded.
Washington considers Hezbollah as a terror organization despite the fact that its fighters have fended off several Daesh attacks inside Lebanon. They have also been providing assistance to Syrian army forces to counter the ongoing foreign-sponsored militancy.
Rohrabacher's remarks came on the same day as Trump made contradictory comments on the Tehran attacks, almost condemning the victims instead of the Daesh terrorists.
"We underscore that states that sponsor terrorism risk falling victim to the evil they promote," claimed Trump on Thursday.
Daesh terrorists were among militants initially trained by the CIA in Jordan in 2012 to destabilize the Syrian government.
Taking on Iran was on top of Trump’s agenda in his first foreign tour, which took him to Saudi Arabia and Israel.