TEHRAN, June 11, YJC - A senior commander of the Islamic Revolution Guards Corps (IRGC) says the readiness of Iran's security forces at the Parliament and the Mausoleum of the late Founder of the Islamic Republic Imam Khomeini foiled the mission of Daesh terrorists in the Iranian capital. 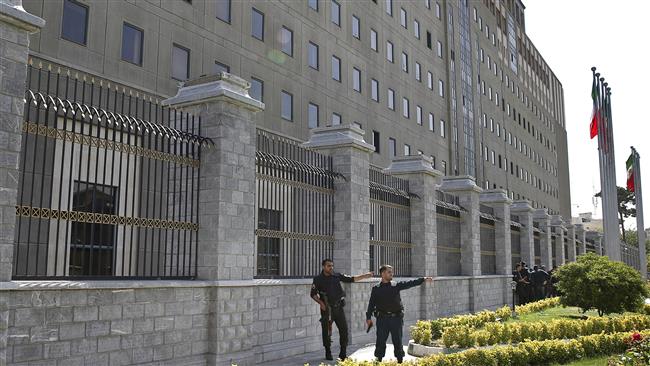 TEHRAN, Young Journalists Club (YJC) - Ali Asghar Gorjizadeh, the commander of IRGC’s Ansar-ol-Mahdi Corps, which is responsible for protection of senior Iranian officials, said in a televised interview on Saturday that from the very first moments after the twin terrorist attacks, members of the Ansar-ol-Mahdi Corps took measures to encounter the terrorists.
At least 17 people were killed and over 50 others injured in Tehran on Wednesday when gunmen mounted almost simultaneous assaults on Iran’s Parliament and the Mausoleum of the late Founder of the Islamic Republic Imam Khomeini.
The Daesh Takfiri terrorist group claimed responsibility for the assaults.
Gorjizadeh said the terrorist incidents in Tehran showed the ignominy of the terrorists’ mission, on the one hand, and the greatness of the Islamic establishment and the Iranian security forces, on the other.
He added that the terrorists entered the Parliament’s public reception hall and launched their operations there at a time when Iranian lawmakers were holding an open session, but the prudence of Parliament Speaker Ali Larijani prevented the closure of the session, which continued in peace.
There was only one security control there because it is a place where ordinary people come and go without there being too stringent security measures, Gorjizadeh said, adding that a group of operatives brutally entering the area and opening fire on security forces at the first step and then randomly shooting people was an ignoble deed.
"The work to confront these terrorists was somehow complicated due to the presence of a large number of ordinary people and Majlis (Parliament) employees, but our forces succeeded in evacuating some 150 individuals completely safely through various exits such as windows and in other ways,” the IRGC commander said.
He noted that the security forces prudently managed to divert the terrorists away from the Parliament’s main chamber were the open session was being held.
The terrorists went to the fourth floor and stayed there and the IRGC forces immediately moved to evacuate the wounded people, the commander said, adding, "If this had not been carried out, terrorists would have killed many of them.”
They were trapped and immobilized on the fourth floor where their ammunition ran out thanks to wisdom of the IRGC forces, Gorjizadeh said, adding, "Only few grenades and explosive belts remained for them.”
The commander of the Ansar-ol-Mahdi Corps further noted that the terrorists at the Parliament building had one explosive belt but could not use it.
One of the terrorists was killed by his own grenade which also injured another one, he said, noting that the IRGC forces then shot both of them dead.
Gorjizadeh explained that the terrorists acted in a very brutal way, adding that they even shot at a woman carrying her child and indiscriminately targeted ordinary people but the "brave and self-sacrificing” measures by the IRGC forces were very effective in preventing heavy damage.
Some experts say that the Daesh terrorists had originally planned to attack the main chamber of the Iranian Parliament. Once there, they likely planned to take a number of Iranian lawmakers hostage using them as leverage to extort concessions from the Islamic establishment.
However, faced with fierce resistance from Iran's security forces, which they apparently had not predicted and did not expect, the terrorists fled to other easily accessible parts of the parliament building where they were cornered and eliminated by Iranian forces.
On Thursday, the Iranian Intelligence Ministry released the names of the five terrorists who were killed after carrying out the deadly attacks in Tehran.
On Friday, Iranians from all walks of life held a massive funeral ceremony for the victims of the terrorist incidents.
Iranian Intelligence Minister Mahmoud Alavi said in a televised interview on Saturday that the mastermind of the Tehran terrorist attacks had been killed earlier in the day.
Iran’s Intelligence Ministry also said in a statement on Friday that following a series of sophisticated intelligence operations and with the cooperation of the families of some of the terrorists, 41 elements of Daesh were identified and arrested before conducting any acts of terror.
It added that the terrorists were detained in the Iranian provinces of Kermanshah, Kordestan, West Azarbaijan and Tehran.
An official with the Justice Department of Iran’s Alborz Province, Ahmad Fazelian, also said on Saturday that eight more individuals had been arrested in connection with the terrorist attacks in Tehran, Presstv reported.
He added that the eight were accused of having provided backup for the five terrorists who carried out the attacks in Tehran.
Local police in Iran’s western province of Kermanshah also said that two people had been arrested in connection with the double attacks, while over 90 handguns had been discovered during a security operation in Ravansar County.
Meanwhile, Tehran police said the car used by the terrorists for the twin attacks was discovered on Saturday in central Tehran.
The terrorists first went by the car to Imam Khomeini’s Mausoleum and after dropping two of them, went to the city center to carry out the terrorist attack on the parliament, it added.
Share to
Related News
Iran to respond more decisively to terrorist attacks on its soil: Rouhani
Iran has intelligence of S Arabia propping up terrorists near its borders: Zarif
Mastermind behind Tehran twin attacks killed: Intelligence Ministry
Iran's Parliament speaker vows ‘serious’ response to US Senate bill
Commander of Tehran twin terrorist attacks killed: Intelligence Minister
Delighted by Tehran attacks, GOPer says they 'maybe Trump strategy'
Iran arrests 8 more terrorists over Tehran attacks
7 other terrorists arrested in Fars
Iran says arrested 48 Daesh Wahhabi terrorists
Tags
Iran ، terrorism ، attacks
Your Comment