TEHRAN, July 25, YJC -The US House of Representatives is voting today to impose new sanctions against Russia and Iran as well as North Korea, potentially complicating President Donald Trump's efforts of improving relations with Moscow. 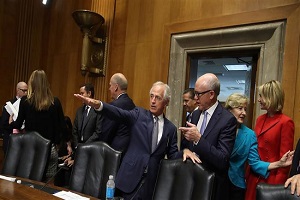 TEHRAN, Young Journalists Club (YJC) -The legislation is the result of a congressional deal reached between Republicans and Democrats at the weekend and is aimed at punishing Moscow for its alleged meddling in the 2016 US presidential election and the reunion of Crimea with Russia.

The reunion happened after about 97 percent voters of the Autonomous Republic of Crimea backed "going home" in a referendum on March 16, 2014 following a 23-year stay in Ukraine.

"We're about there, there's still some procedural issues we're discussing but, you know, I think it worked out very, very well, we still got a couple of things to talk about on North Korea," Corker said.

President Trump could veto the bill if it reaches his desk, but there is a chance that Congress could override his veto with a two-thirds vote.

The Countering Iran's Destabilizing Activities Act, overwhelmingly passed by the Senate in mid-June, was held up in the House of Representatives after Republicans proposed that North Korea sanctions be included in the bill.

The House now will vote on a package of sanctions covering Iran, North Korea and Russia. The legislation would make it much harder for President Trump to try to lift sanctions against Moscow.

Trump administration objects to bill provision
Under the proposed bill, Trump is required to submit to Congress a report on his proposed actions that would "significantly alter" US foreign policy towards Russia.

The Trump administration has objected to this provision in the sanctions bill.

"He's going to study that legislation and see what the final product looks like," White House spokeswoman Sarah Huckabee Sanders said on Monday when asked whether Trump would back it.

The bipartisan measure also includes sanctions against Iran and its Islamic Revolution Guards Corps (IRGC), as well as North Korea for its missile tests.

"I am pleased to see the Congress work as a whole to hold Iran, Russia, and North Korea accountable for their continued destabilizing activities across the world," Democratic Senator Robert Menendez said in a statement on Monday.
The bill also "sends a clear message to the president that Congress is prepared to act with a united voice," he added.

Since his inauguration on January 20, President Trump has adopted a hostile policy towards Iran.

He has repeatedly vowed to cancel the nuclear agreement between Iran and the P5+1 group of countries, including the US, and his administration has imposed new sanctions on multiple Iranian individuals and entities.

In addition, Trump reportedly planned to designate IRGC as a terrorist organization, but the US State and Defense Departments cautioned him against it.

EU warns US over further anti-Russia sanctions
The EU has warned the US over “unintended consequences” which may result from imposing further sanctions against Russia.

The European Commission released a statement this weekend, warning that imposing fresh sanctions against Russia without coordination with G7 countries may have "wide and indiscriminate" "unintended consequences."

Germany has already announced that it may engage in retaliatory moves if the US sanctions German firms involved in the construction of a new Baltic pipeline for Russian gas.