TEHRAN, August 7, YJC -Authorities in the ruling Socialist Party of Venezuela have announced that an anti-government military action has been suppressed near the central city of Valencia. 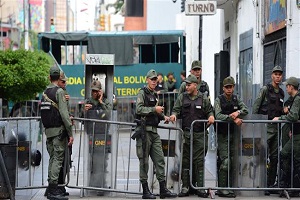 TEHRAN, Young Journalists Club (YJC) -Diosdado Cabello, a senior official in President Nicolas Maduro’s ruling party, said on Sunday that the reported rebellion in a military base in the town of Naguanagua was crushed in the beginning earlier in the day and that the situation in the base was now under control.

Cabello’s statement came hours after the release of a video that showed a group of men in military uniform calling for a broad uprising against Maduro. The soldiers said the action was only a rebellion against Maduro’s move to dismantle democratic institutions in Venezuela.

“This is not a coup d'etat,” said a man in the video who identified himself as Juan Carlos Caguaripano, a former National Guard captain, adding, “This is a civic and military action to re-establish constitutional order. But more than that, it is to save the country from total destruction.”

Caguaripano, seen flanked by about a dozen men in military uniforms, also called for the formation of a transitional government in Venezuela.

Witnesses in Naguanagua also reported hearing gunshots before dawn. Officials in Venezuela’s Defense Ministry declined to comment on the incident, which came two days after the formation of a controversial constitutional assembly in Venezuela.
Maduro congratulates armed services

After the attack was quashed, Maduro congratulated the armed services for beating back the rebellion.

He noted that two assailants were killed and 10 more were captured by security forces.

"Those who escaped are being actively searched for, and we are going to capture them," Maduro said in a televised address.

He also cited the military as saying that those detained were hired by extreme-right activists with connections to foreign governments.

The opposition says the assembly is a ploy to monopolize power in the hands of Maduro. The embattled president has denied the allegations and says the assembly, which was set up following nationwide elections on July 31, has been necessary to restore peace and order after months of political unrest in Venezuela.

In a move that drew further rebuke from the opposition and foreign governments, the assembly sacked Venezuela’s chief prosecutor Luisa Ortega Diaz on Saturday after troops surrounded her office in downtown Caracas. Ortega Diaz, a former Maduro ally who turned his arch foe, was dismissed after she filed a complaint to block the installation of the new assembly.