TEHRAN, August 8, YJC - US military contractor Erik Prince has advised the administration of President Donald Trump to deploy Western mercenaries to Afghanistan to save both manpower and money. 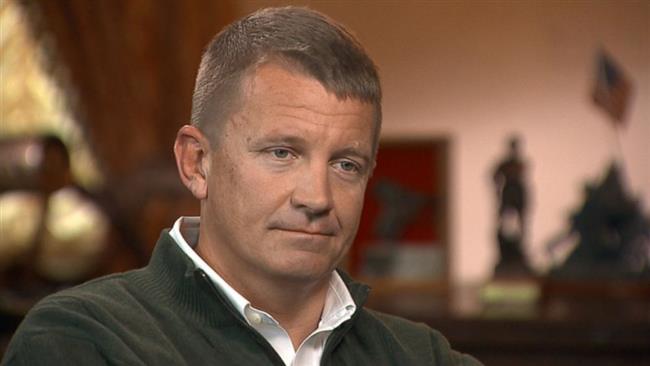 TEHRAN, Young Journalists Club (YJC) - Prince, who founded the notorious private military company Blackwater USA, now called Academi, has proposed a two-year plan for about 5,000 professional killers and under 100 aircraft, bringing the total cost of the failing US war to less than $10 billion a year, according to documents seen by the Financial Times.

Prince, a former Navy Seal, said on current spending, the Afghan military campaign would cost the US $45 billion this year and $50 billion the next.

“We’re spending too much in Afghanistan and it’s making the insurgency worse, through corruption and leakage to the Taliban,” the former Navy Seal told the newspaper.

“I then heard about a big troop surge [proposal] and I thought that was a dumb idea . . . I’m going to contract everything; I’m going to get down to some spending sanity,” he said.

Blackwater received widespread notoriety in 2007 when a group of its mercenaries killed 14 Iraqi civilians and wounded 18 others using gunfire and grenades at a busy Baghdad intersection.

Prince, who expects to present his revised and updated plan to the White House, is critical of Washington’s approach to Afghanistan, whose US-led NATO mission has rotated through 17 military commanders in 16 years.

Prince proposes that the mercenaries be paid $500-$600 a day and would be drawn not only from the US, but also from the UK, France, Germany, Sweden, Australia and South Africa.

The proposal was reportedly offered at the request of Steve Bannon, Trump’s chief strategist, and Jared Kushner, his son-in-law and senior adviser.

The US currently has about 8,400 troops in Afghanistan, with about another 5,000 troops from NATO allies. US Defense Secretary James Mattis has proposed adding around 4,000 more.

But Trump has been skeptical about a troop surge in Afghanistan. He wants to save both manpower and money and avoid getting sucked into the sort of wars he promised the electorate he would avoid.

US officials said last week that Trump's doubts about the war in Afghanistan has led to a delay in completing a new strategy in the war-torn country.

During a July 19 meeting in the White House, Trump suggested that US Army General John Nicholson, commander of American forces in Afghanistan, should be fired for not winning the war, according to the officials, who spoke on condition of anonymity.

The war in Afghanistan is the longest in US history with a cost of $1 trillion. More than 2,400 American have died in the country since the invasion in 2001 and another 20,000 have been wounded, Presstv reported.

Afghanistan is still suffering from insecurity and violence years after the United States and its allies invaded the country as part of Washington’s so-called war on terror. The military invasion removed the Taliban from power, but their militancy continues to this day.