TEHRAN, August 9, YJC -Democratic lawmakers are seeking information about how the US federal government is spending tax dollars at businesses owned by President Donald Trump. 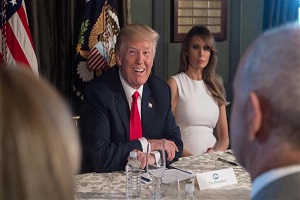 TEHRAN, Young Journalists Club (YJC) - Democrats on the House Oversight Committee on Tuesday asked cabinet departments to hand over documents about their spending at "businesses owned by or affiliated with the Trump Organization" by August 25.

"The American people deserve to know how their tax dollars are spent, including the amount of federal funds that are being provided to private businesses owned by the president and the purposes of these expenditures," the lawmakers said in a letter to Elaine Duke, acting secretary of the Department of Homeland Security.

They sent similar requests to all cabinet secretaries. They described the letters as the first step in an investigation of federal spending involving the president’s for-profit properties.

The lawmakers warned that Trump's "financial entanglements make it impossible to know whether he is making his decisions in the public interest" or to benefit of the president and his family.

President Trump has spent much time at his own properties away from the White House. He has visited his properties 48 times since his inauguration in January, according to a tally by the Associated Press.

The president is currently on a 17-day vacation, spending time at his New Jersey golf club and planning an excursion to New York City next week.

Most US president have maintained and visited their private homes while in office, but the difference with Trump is that his properties are part of his business empire.

Before taking office, Trump turned over management of his businesses to his adult children, but he did not give up ownership, raising serious questions about potential conflicts of interest.

"It looks like he's making money off being president," said Democratic Rep. Robin Kelly. "This is not, you know, for him to make money for his business, or his family to make money. But it seems like that's what happening."

Walter Shaub, the former head of the federal ethics watchdog agency, recently warned that Trump’s conflicts of interest had put the US at risk of being seen as a “kleptocracy.”

Shaub, who quit last month as director of the Office of Government Ethics (OGE), told The Guardian that the White House faced an “ethics crisis” due to Trump’s business ties.

The Trump family has also been accused of benefiting from nepotism. The president has come under a furious backlash from political opponents and ethics experts for placing his children in positions of power.