TEHRAN, August 9, YJC -At least 29 civilians, including women and children, have lost their lives in fresh air raids conducted by the US-led coalition in Syria’s northern city of Raqqah over the past 24 hours, a monitoring group says. 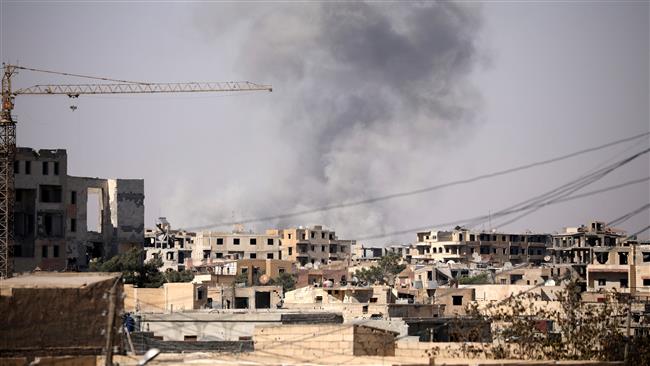 TEHRAN, Young Journalists Club (YJC) - The so-called Syrian Observatory for Human Rights (SOHR) said on Tuesday that the victims included a family of 14 who had been displaced from the central city of Palmyra.

There were 14 children and nine women among the victims, said the report.

The SOHR further warned that the death toll could rise as a number of people had been critically wounded in the aerial assaults.

The US and its allies launched a campaign of airstrikes against what are said to be Daesh positions inside Iraq in August 2014 after the Takfiri terrorist group overran parts of the Arab country.

The coalition expanded its campaign to Syria in September 2014 without any authorization from the Damascus government or a UN mandate.

The strikes, however, have on many occasions resulted in civilian casualties and failed to fulfill their declared aim of countering terrorism.

The coalition admitted in July that its air raids had killed at least 600 civilians in both Iraq and Syria over the past three years, but monitoring group Airwars said the actual number is at least 4,354.
Last week, Damascus wrote to the UN, calling for the dissolution of the “illegitimate” US-led coalition over its “continued and systematic massacre” of civilians.