TEHRAN, August 14, YJC -Yemeni children have rallied outside the UN building in the capital Sana'a, marking the first anniversary of the death of 10 children in a Saudi airstrike in the Sa'ada district. 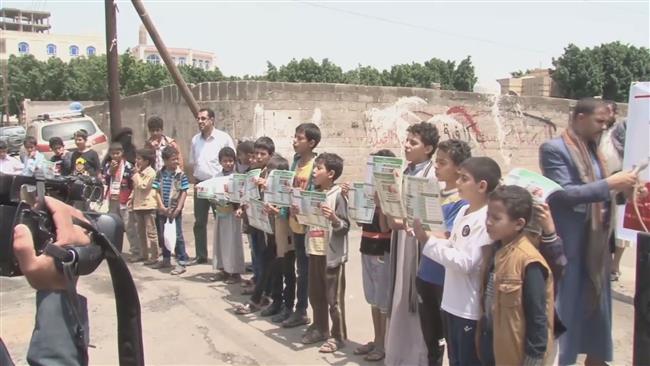 TEHRAN, Young Journalists Club (YJC) - As many as 28 others were injured after the airstrike hit their school in the Juma'at Bin Fadel village on August 12 last year. Images flooded the social media afterwards showing rows of small bodies laid alongside one another.

The incident was corroborated by Doctors Without Borders but Riyadh claimed it had targeted a training camp used by Yemen’s Houthi fighters.

The Houthis have been defending Yemen against the Saudi invasion, launched in 2015 to restore former president Abd Rabbuh Mansour Hadi.

More than 12,000 people have been killed since the onset of the invasion and much of the country's infrastructure has been ravaged in Saudi airstrikes.

The protesters on Sunday demanded an end to the airstrikes, and called for children's rights to be respected.
"We Yemeni children stand in front of the UN gate and demand our rights and for the lifting of the siege on Yemen,” said young protester Mohamed Ali.

Yahya Saleh, another child protester, said, "The aggression killed my friend, destroyed my school, and displaced my family. We demand rights for children."

Saudi Arabia has also subjected Yemen to an all-out blockade, claiming it would prevent alleged arms transfers to the Houthis.

Also on Sunday, the United Nations Office for the Coordination of Humanitarian Affairs (OCHA) deplored the humanitarian situation in Yemen, saying 15.7 million people there did not have access to potable water, and 14.8 could not avail themselves of simple medical services.

Thirty-thousand workers serving in the country’s medical and waste water management services had not received their wages in a year, seriously affecting their commitment to their duties, the body said.

OCHA said children and the elderly were bearing the brunt of the shortcomings, which had notably contributed to the exacerbation of a cholera spread, which has bedeviled the nation. The outbreak has killed 1971 civilians, and afflicted 498,000 others since April.

Sixty-percent of Yemen’s population was malnourished, it reported, and said seven million of these, including two million children, suffered from severe malnourishment.