TEHRAN, August 15, YJC - The military chiefs of Iran and Turkey have discussed ways to improve the two countries’ security, particularly in border areas, and continue the fight against terrorism. 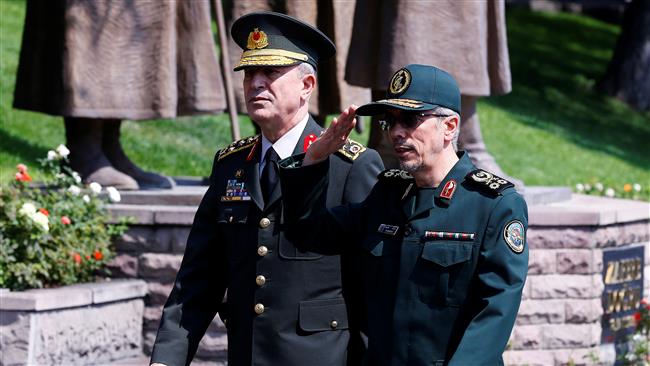 “As one of the important neighbors of the Islamic Republic of Iran, Turkey enjoys a prominent status in the region and the Muslim world,” Baqeri said.

He added that the two countries’ military officials had not exchanged such visits for a long time, but he decided to make the trip to Ankara in view of the current developments in the region, issues pertaining to bilateral security, and the need to continue the fight against terrorism.

Baqeri arrived in Ankara on Tuesday for a three-day visit at the head of a high-ranking politico-military delegation. He said his trip was aimed at discussing enhanced cooperation on military and regional issues.

It is a first visit by an Iranian chief of staff of the Armed Forces to Turkey.

Iran is fighting both Kurdistan Workers' Party militants and a PKK offshoot known as PJAK in its northwestern border region with Turkey.

PJAK terrorists randomly carry out hit-and-run attacks on Iranian targets, after which they retreat to their lairs in Iraq and Turkey.