TEHRAN, August 22 - The terrorist who went on the run after killing 14 people in Barcelona has been shot dead while wearing a fake suicide belt. TEHRAN, Young Journalists Club (YJC) - Younes Abouyaaqoub was shot on Monday by armed police in the town of Sant Sadurni d’Anoia in the district of Subirats, around 30 miles west of Barcelona, bringing to an end a five-day international manhunt.

The 22-year-old Moroccan reportedly shouted “Allahu akbar” as he was challenged by officers, leading to fears that he was about to launch a bomb attack. Police used a remote-controlled robot to check his body for explosives, but later confirmed that the suicide belt he was wearing was fake.

Abouyaaqoub was the last remaining member of the jihadist cell responsible for last week’s twin terrorist attacks in Barcelona and Cambrils. Police now believe he was at the wheel of the van when it ploughed into crowds on Las Ramblas on Thursday afternoon, killing 13 people including Julian Cadman, a seven-year-old British boy.

He then fled on foot, walking around Barcelona for 90 minutes before hijacking a car and killing its owner, 34-year-old aid worker Pablo Perez, in order to make his getaway.

CCTV images emerged on Monday, appearing to show Abouyaaqoub starting to make his escape on foot through Barcelona’s La Boqueria market after the attack. He then rammed the Ford Focus through a police checkpoint before abandoning the vehicle and fleeing on foot.

Hours later, five of his associates launched a second attack in the coastal resort of Cambrils, in which a woman was stabbed to death and a police officer badly injured. All five terrorists were shot dead by police at the scene.

There had been fears that Abouyaaqoub had fled across the border into France and might be preparing another terrorist outrage.

But the Catalan police force was alerted shortly before 4.30pm local time, when a resident of Subirats spotted a man acting suspiciously in the street.

She shouted to ask him what he was doing, causing him to run off towards a vineyard, where he was quickly challenged by armed officers.  Roget Queral, an 18-year-old resident of Sant Sadurni d’Anoia, said he believed he had seen Abouyaaqoub in the area before last week’s attacks, leading to suggestions that he may have had a hideout in the town. 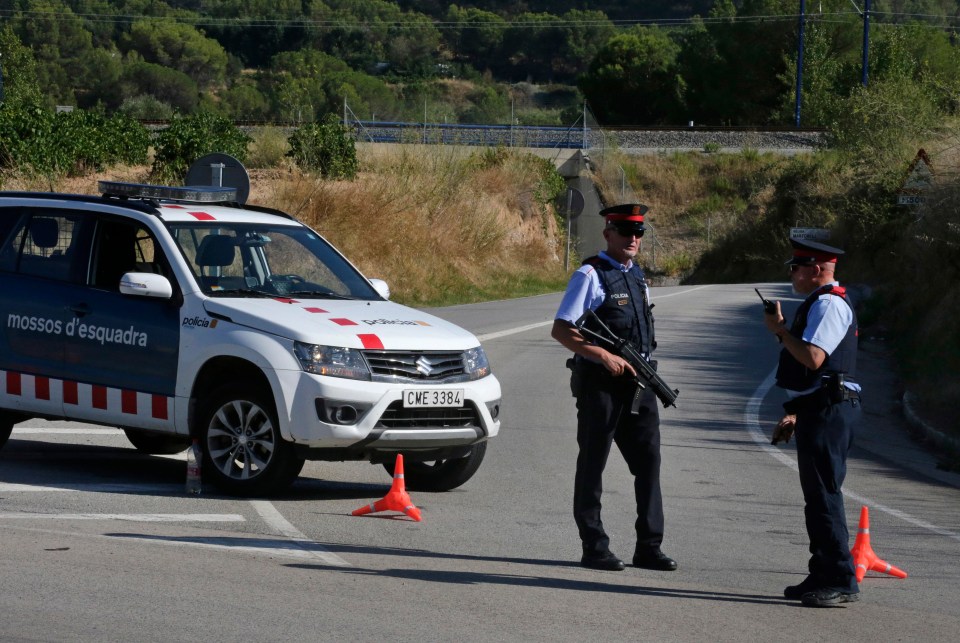 Police were last night continuing to piece together the movements of the cell, which was based in the town of Ripoll, around 60 miles north of Barcelona in the foothills of the Pyerenees.

It is now believed 40-year-old Abdelbaki Es Satty, the local imam, was responsible for radicalising the 12-strong Moroccan group. A former hashish smuggler, it is thought he became a jihadist after meeting one of the ringleaders of the Madrid train bombings while serving a four-year prison sentence in Valencia. After his release, he moved to Ripoll and began working at the local mosque as an imam.