US intelligence officials under pressure by Trump administration over Iran

TEHRAN, August 28 - The administration of US President Donald Trump is pressuring intelligence officials in the United States to produce intelligence that could be used to declare Iran in violation of a nuclear deal the president despises, reports said. 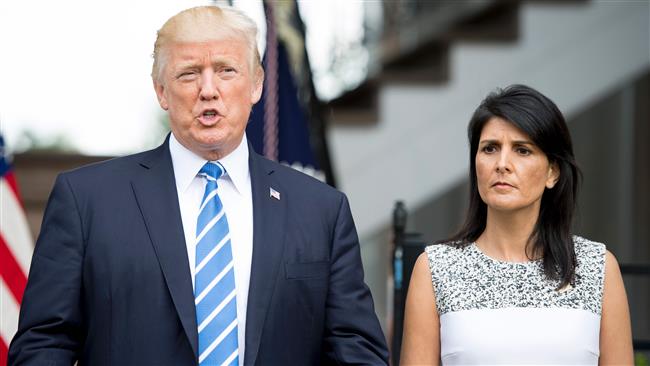 TEHRAN, Young Journalists Club (YJC) - “Anecdotally, I have heard this from members of the intelligence community — that they feel like they have come under pressure,” said Ned Price, a former CIA analyst, The Guardian reported Monday.

Price said intelligence officials had told him they felt the scenario that led to the US invasion of Iraq was repeating itself and that they were resisting the pressure to manufacture intelligence.

The US is a party to a multilateral deal with Iran that was concluded under the administration of former president Barack Obama in 2015. But Trump, who took over in January 2017 and who campaigned mainly on a platform of undoing every one of Obama’s major policy achievements, has taken aim at the Iran deal, known as the Joint Comprehensive Plan of Action (JCPOA).

Earlier, Trump sent a senior member of his administration to Vienna to lobby with the International Atomic Energy Agency (IAEA) to request access to Iranian military sites as part of the deal, a move generally considered as an attempt to undermine the JCPOA.

The IAEA, tasked with monitoring Iranian compliance with the deal, has consistently verified that Iran has been holding up its end of the bargain.

Trump has also set up a team of his White House confidantes to present him with “options” other than certifying Iranian compliance with the deal to the Congress. Such certification is needed by US law every 90 days in order for the Congress to continue to withhold nuclear-related sanctions against Iran, itself a US commitment under the JCPOA.

But the Trump White House attempts to pressure the intelligence community are a newer development.

David Cohen, a former deputy director of the CIA, told the CNN that the politicization of intelligence on Iran would have serious consequences for the US intelligence community in all areas.

“If our intelligence is degraded because it is politicized in the way that it looks like the president wants to do here, that undermines the utility of that intelligence all across the board,” he warned.

Richard Nephew, a former Obama administration official and a member of the US negotiating team in the talks with Iran, said the White House was seeking manufactured intelligence to pull out of the deal.

“It seems there is a faction within the administration that is trying to lay the basis for getting out [of the JCPOA] on the basis of cooked books,” he said.

Nephew and other former officials said members of the US intelligence community had learned the lessons of the Iraq scenario the hard way and would be unwilling to fabricate intelligence.

In the lead-up to the US invasion of Iraq in 2003, the then-White House officials said they were in possession of conclusive evidence that the then Iraqi regime of Saddam Hussein was in possession of weapons of mass destruction (WMDs).

An eight-year war and hundreds of thousands of lost lives later, the US withdrew without ever finding any WMDs. In a debate that continues to this day, White House officials responsible for the invasion have blamed false intelligence, and spies have said they had been under pressure by the White House to provide intelligence.

The report by The Guardian said that things were not quite the same this time, however.

“Unlike the case of Iraq…, where there were deep divisions in the US intelligence community over the evidence for Iraqi weapons of mass destruction, there is now a general consensus among US intelligence and foreign intelligence agencies, the state department, the IAEA and the other five countries that signed the JCPOA, as well as the European Union, that there is no significant evidence that Iran has violated its obligations under the deal,” it said.

The Trump administration efforts to undermine the deal have disgruntled some US politicians who had themselves been opposed to the deal before.

Senator Bob Corker, one such politician, has implied that by unilaterally walking away from the deal, the US would face a credibility issue.

Mark Dubowitz, the chief executive of the Foundation for Defense of Democracies, a group that worked to defeat the Iran deal, said simply pulling out would “alienate the Europeans,” according to an article by The New York Times.

Iran has complained about such politicizing of the matter by the US. Iranian Foreign Minister Mohammad Javad Zarif has written to the IAEA chief to warn that the agency’s bending under the US pressure would “undermine [its] independence and credibility.”

Unlike the US, the European parties to the deal and Russia and China have never raised any complaints about the agreement and have stressed full commitment to it. The UK, France, Germany, Russia, and China, along with the former US administration, invested considerable time and political capital in the negotiations that culminated in the Iran deal.

Share to
Related News
Iranians won’t be fooled by US games, fake sympathy: FM Zarif
US Senator Cotton calls on Trump to decertify Iran nuclear deal
US interior secretary hints at economic war on Iran
US ‘should & will’ get along with Russia – Trump
Tags
US ، inteligence ، Iran
Your Comment