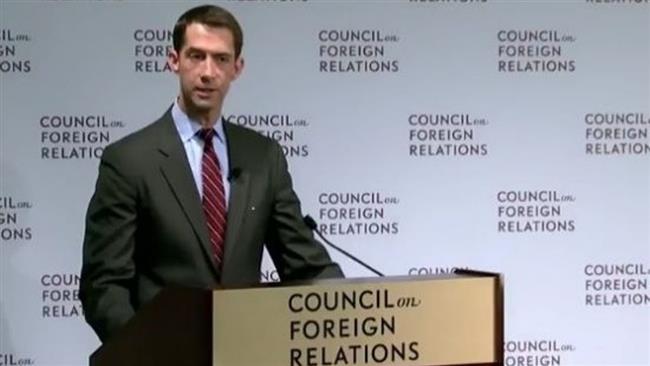 TEHRAN, Young Journalists Club (YJC) - US Senator Tom Cotton has called on the administration of President Donald Trump to decertify the 2015 Iran nuclear agreement, just hours after US Defense Secretary James Mattis said the US should remain in the international accord.

Cotton, a Republican from Arkansas and a member of the Senate Armed Services Committee, told an audience at the Council of Foreign Relations (CFR) on Tuesday that Trump was correct in calling the deal “a direct national security threat.”

“Put simply, this deal only makes sense if you assume, contrary to all experience, that Iran will evolve into a peaceful, law-abiding regime in ten years,” Cotton said at CFR, a New York-based think tank specializing in US foreign policy.

During a Senate hearing on Tuesday, Mattis said Trump must consider remaining a party to the nuclear deal because the international accord serves US interests.

The remarks by the Pentagon chief were in sharp contrast with Trump's assessment that the nuclear agreement is an "embarrassment" to the US.

Trump has desperately sought a pretext to scrap or weaken the nuclear deal, known as the Joint Comprehensive Plan of Action (JCPOA), and get rid of the limits it imposes on the US ability to pursue more hostile policies against Iran.

The US Republican president faces an October 15 deadline for certifying that Iran is complying with the deal. Such certification is needed by US law every 90 days in order for the Congress to continue to withhold nuclear-related sanctions against Iran, itself a US commitment under the JCPOA.

The Trump administration has twice so far certified Iran’s compliance with the deal, but if he refuses to do that for a third time, then the Republican-controlled Congress will have 60 days to decide whether to re-impose sanctions waived under the deal. That would let Congress effectively decide whether to kill the deal.

Share to
Related News
Trump’s move against Iran deal to cause 'friction' with EU allies: State senator
Can US be trusted anymore amid talks of Iran nuclear deal scrapping?
Trump government not signing UN anti-nuclear treaty
180 House Dems ask Trump to certify Iran nuclear deal
Tillerson working to keep US in Iran deal: Report
US intelligence officials under pressure by Trump administration over Iran
US mounting pressure on IAEA over inspection of Iran’s military sites
US Treasury slaps sanctions on Iranian companies after rocket test
Tags
US ، senator ، Iran ، deal
Your Comment