Younosi: Khatami, Hashemi sure about Rohani

TEHRAN, YJC. The Reform minister has said that both Khatami and Hashemi have favorable regards toward Rohani in upcoming elections. 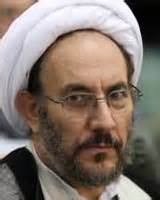 Ali Younosi, speaking in a meeting with Rohani’s campaign staff in Isfahan, said "I know Mr. Rohani to be the fittest person for current situations. Mr. Hashemi also is quite convinced with him.”

Younosi stressed the fact that according to the holy Quran it is demanded that jobs be put in the right hand, adding "This means that you are obliged to give responsibilities to the appropriate person. Each and every one of you has to lay the government, which is the biggest social responsibility, in the hands of capable, trustworthy people.”

The Reform Minister of Intelligence stressed the fact that during the Reform administration the most important task was the nuclear issue which was carried out very well by Hassan Rohani, proving his metal in handling high governmental affairs.