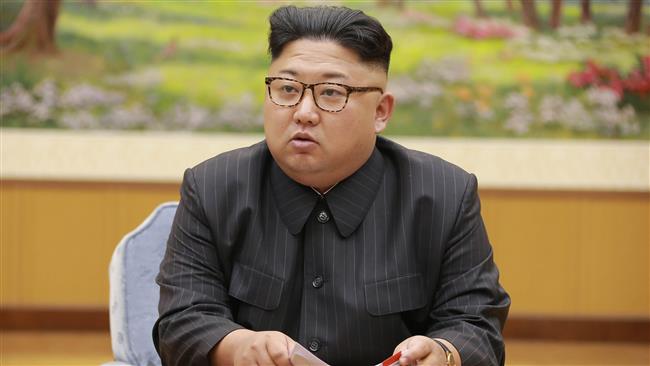 TEHRAN, Young Journalists Club (YJC) -"Our final goal is to establish the equilibrium of real force with the US and make the US rulers dare not talk about military option for the DPRK (Democratic People's Republic of Korea)," Kim was cited as saying by the country’s state news agency on Saturday.

Kim also vowed to complete the country's nuclear weapons program despite the mounting sanctions against Pyongyang.

The remarks came just after the UN Security Council, in a unanimous statement released following an emergency closed-door meeting Friday, "strongly condemned these [missile] launches, condemned further the DPRK for its outrageous actions, and demanded that the DPRK immediately cease all such actions."

The statement, backed by the North’s key ally China, did not threaten Pyongyang with further sanctions but stressed that all countries must "fully, comprehensively and immediately" implement all the Security Council resolutions against North Korea.
Early on Friday, North Korea fired a medium-to-long range Hwasong-12 missile over Japan a few hours after Pyongyang threatened to "sink" its southeastern neighbor.

The missile launch from Pyongyang prompted Japanese officials to stop regular TV programs to ask people in the Japanese island of Hokkaido to take shelter.

The missile flew for about 20 minutes before crashing into the Pacific Ocean about 2,000 kilometers east of Hokkaido at around 7 a.m. local time, the Japanese state broadcaster NHK reported.

In response, South Korea's military immediately launched a ballistic missile drill of its own while the North's rocket was still airborne.

President Moon Jae-in told Seoul's national security council that negotiations with North Korea were "impossible in a situation like this."

US President Donald Trump said during a speech at Joint Base Andrews in Maryland that Washington would defend its people against all threats, noting that the US options for addressing Pyongyang’s threats "are both effective and overwhelming."

In Washington, the White House announced Trump was scheduled to meet with Japanese Prime Minister Shinzo Abe and the South Korean president in New York on September 21 to discuss North Korea.

White House National Security Adviser H.R. McMaster warned that Washington was running out of patience for diplomatic solutions, noting, "For those... who have been commenting on a lack of a military option, there is a military option."

US Ambassador to the UN Nikki Haley repeated McMaster's position, saying that the North continues to be "provocative" and "reckless."

"So having said that, I have no problem kicking it to (Defense Secretary) General (James) Mattis because I think he has plenty of options," she pointed out.
However, Russia and France have jointly appealed for dialogue with North Korea, describing it as the only way to resolve tensions over Pyongyang’s nuclear weapons program.

The UN secretary general is scheduled to hold talks with all the sides to the conflict, including with North Korea's Foreign Minister Ri Yong-ho.
On Monday, the UN Security Council unanimously voted to adopt fresh US-backed sanctions against North Korea over its nuclear tests.

The resolution was the eighth against Pyongyang since 2006. So far, harsh sanctions have been imposed on the North over its ballistic missile and nuclear programs.
The previous round of sanctions was adopted just last month after Pyongyang launched two long-range missiles in July.

Punitive measures have so far failed to stop the North’s nuclear weapons program. Pyongyang says it needs to continue and develop its military program as a deterrent in the face of hostile policies by the United States and its regional allies, including South Korea and Japan.

The explosion was felt by residents in Chinese cities hundreds of kilometers from the border. According to international seismic agencies, it created an artificial 6.3-magnitude earthquake.

On Monday, North Korea warned Washington against a new round of sanctions and said its retaliatory measures “will cause the US the greatest pain and suffering it had ever gone through in its entire history.”