TEHRAN, October 5 - Discord between President Donald Trump and his chief diplomat is at an all-time high, spilling into public view in recent days by Rex Tillersons insult. 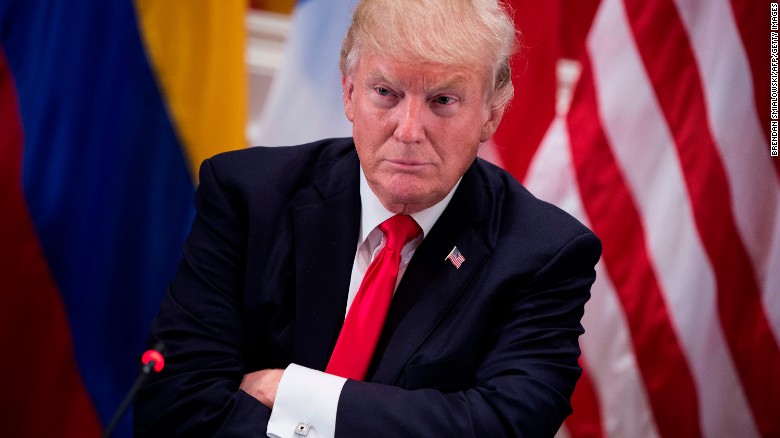 TEHRAN, Young Journalists Club (YJC) - Discord between President Donald Trump and his chief diplomat is at an all-time high, spilling into public view in recent days and peaking with a NBC News report Wednesday that Secretary of State Rex Tillerson called Trump a "moron" in a Pentagon meeting.

Trump was aware before Wednesday's report that Tillerson had referred to him as a "moron" at the Pentagon this summer, a source familiar with the conversation said, but it's unclear whether Trump discussed the remark with Tillerson. Trump was not present at the Pentagon meeting. A White House source also confirmed that Trump knew about the insult prior to Wednesday.
During a hastily arranged statement Wednesday morning, Tillerson insisted he enjoys a close relationship with Trump and called him "smart." But he would not directly deny that he'd called Trump a "moron."
"I'm not going to deal with petty stuff like that," Tillerson said from the State Department Treaty Room. "I'm just not going to be part of this effort to divide this administration."
Though Tillerson didn't deny calling Trump a moron, Trump tweeted: "The @NBCNews story has just been totally refuted by Sec. Tillerson and @VP Pence. It is #FakeNews. They should issue an apology to AMERICA!"

I told Rex Tillerson, our wonderful Secretary of State, that he is wasting his time trying to negotiate with Little Rocket Man...

Trump was flying aboard Air Force One at the time to greet survivors of Sunday's mass shooting in Las Vegas.
Trump later told reporters inside a Las Vegas hospital he has "total confidence" in Tillerson,
Trump called reports that the secretary of state called him a moron "fake news" and "totally made up."
Trump answered the question after praising the work of doctors and nurses who responded to Sunday's mass shooting on the Las Vegas strip.
After Tillerson's comments, a person familiar with Trump's thinking said the President is not pleased that Tillerson's terming him a "moron" has been made public, but isn't on the verge of asking for his resignation.
The President and Tillerson have an uneasy relationship, this person said, but Trump is wary of another high-profile departure from his administration after a tumultuous eight months in office.
Trump is cognizant that his administration and inner West Wing operation are shedding staff at an alarming clip. Trump has either dismissed or seen quit a chief of staff, national security adviser, press secretary, two communications directors, chief strategist, acting attorney general, FBI director, and -- as of Friday -- a Health and Human Services secretary.
Trump, above all, wants to project a sense of competence and believes the rapid turnover of staff helps fuel the notion his administration is in chaos, according to the source.
Over the past several months, Trump has been agitated -- but not outright furious -- at the distance Tillerson has put between himself and the White House on issues like Qatar, Charlottesville and North Korea.
Tillerson's pressure on Trump to certify Iran's compliance with the deal in July made him more upset, but nearly every national security official within the administration was on Tillerson's side, making it harder for Trump to fully blame his top diplomat.
Separately, another official suggested Tillerson will want to help Trump get through his November slog through Asia, an exhausting five-country tour that includes a high-stakes visit to Beijing. Tillerson was in Beijing last week to lay some of the groundwork for those talks.
Sources say Vice President Mike Pence has become a bit of a sounding board for Tillerson, and the two men often have lunch together. After the "moron" remark, an aide says Pence advised Tillerson on "setting expectations" and counseled him on how to work with the administration toward the President's goals.
Pence's spokesman denied Pence discussing with Tillerson the chief diplomat's potential resignation.
"At no time did he and the secretary ever discuss the prospect of the secretary's resignation from the administration. Any reporting to the contrary is categorically false," said Jarrod Agen, Pence's spokesman.
A senior White House adviser said there is "certainly some friction there to say the least" between Tillerson and the White House but pointed fingers at West Wing staff rather than directly at the President. This person said Tillerson is "obviously growing frustrated because of the unpredictable nature of his job."
Source: CNN
Share to
Related News
Republican Senator Corker blasts Trump for 'castrating' Tillerson
Trump is 'keeping the world from chaos': White House
Trump meets with Vegas shooting victims, won't talk gun violence
Trump avoids gun control talk in Las Vegas visit
US House panel approves $10bn for Trump’s wall
‘Trump’s reading from his notes, doesn’t know where Venezuela is’ – Maduro
$100k ‘Russian’ Facebook ads are a drop in the bucket, pretext to discredit Trump – senator
US Senate pressures social media over 'foreign ads' as it hunts for 'chaos-creating Russians'
Tags
Trump ، Rex Tillerson ، USA ، Pentagon
Your Comment