No talks between Zarif, Tillerson on new US strategy: Iran

TEHRAN, October 14 - The Iranian Foreign Ministry has rejected reports that US Secretary of State Rex Tillerson had notified his Iranian counterpart of Washington’s new strategy on Tehran. 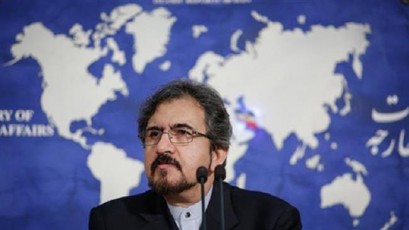 TEHRAN, Young Journalists Club (YJC) -The Iranian Foreign Ministry has rejected reports that US Secretary of State Rex Tillerson had notified his Iranian counterpart of Washington’s new strategy on Tehran.

“What Mr. Tillerson says goes back to his speech during the ministerial meeting of the P5+1 (permanent members of the UN Security Council plus Germany) on the sidelines of the UN General Assembly. Apart from that, there have been no other meeting and talks between the foreign ministers of Iran and the US,” Iranian Foreign Ministry Spokesman Bahram Qassemi said on Friday.

Earlier in the day, Reuters cited Tillerson as saying that during the September meeting at the UN, he had discussed with Zarif the possibility of negotiating a new agreement that would address Iran’s missile program and the nuclear deal’s “sunset clause,” which will put an end to restrictions on Iran's nuclear program after a few years.

“I indicated this to Foreign Minister Zarif when we saw each other on the margins of the UN. I do not want to suggest to you that we give that a high chance of success, but there is an openness to talk about it,” Tillerson said.

US President Donald Trump officially announced on Friday that he would not certify Iran's nuclear deal, known as the Joint Comprehensive Plan of Action (JCPOA), with the US, Britain, France, Germany, Russia and China.

Apart from his refusal to certify the JCPOA, Trump also warned in his strategic review of US policy on Iran that he might ultimately terminate the deal, in defiance of other world powers and undermining a landmark victory of multilateral diplomacy.

Iranian President Hassan Rouhani slammed Trump’s speech against the Islamic Republic as nothing more than insults and delirious talk, urging the US president to brush up on his world history and geography to improve his comprehension of international obligations and global ethics, etiquette and conventions.

The Iranian president further rejected Trump's demand that the 2015 nuclear deal be revised, saying the agreement would remain intact and no article or paragraph would be added or taken away from it.

The Western allies of the US, including the EU and the leaders of France, Britain and Germany as well as Russia criticized Trump’s speech and reaffirmed their commitment to the JCPOA.

The US president also accused the Iranian authorities of not allowing nuclear inspectors to have full access to the Islamic Republic’s nuclear sites.

Shortly after Trump’s speech, IAEA Director General Yukiya Amano refuted the US president’s claim, saying, “So far, the IAEA has had access to all locations it needed to visit.”