'I thought that was sacred’: White House chief of staff rips media over coverage of Gold Star call

TEHRAN, October 20 -White House chief of staff John Kelly took another turn at the press podium to deliver a scathing critique of the lawmaker who listened in on President Donald Trump’s condolence call to a fallen soldier’s wife and the media treatment of it. 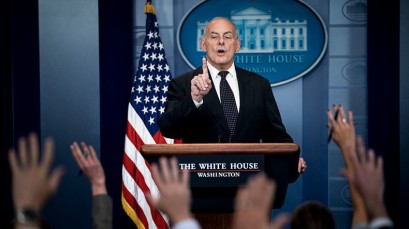 TEHRAN, Young Journalists Club (YJC) -White House chief of staff John Kelly took another turn at the press podium to deliver a scathing critique of the lawmaker who listened in on President Donald Trump’s condolence call to a fallen soldier’s wife and the media treatment of it.

“I was stunned when I came to work yesterday morning, and broken-hearted, at what I saw a member of Congress doing,”Kelly told the White House press corps on Thursday.

He was referring to the war of words involving Trump and Congresswoman Frederica Wilson (D-Florida), who told the press about eavesdropping on the president’s call to the family of La David Johnson, an Army Special Forces sergeant recently killed in Niger.

Wow! Gen. Kelly words our so powerful, shame on you Congresswoman Willson for politicizing a Gold Star Family! pic.twitter.com/2r5e3P8y6T

According to Wilson, who listened to the conversation on the speakerphone, Trump told Johnson’s pregnant wife that her husband “knew what he signed up for.” Media reports on Wednesday condemned the remark as disrespectful.

“It stuns me that a member of Congress would have listened to that conversation,” Kelly said. “And I thought, at least that was sacred.”

A retired US Marine Corps general, who lost a son in Afghanistan in 2010, Kelly told reporters about the process of bringing back dead soldiers to the US for burial and the White House process of expressing condolences. Kelly said he personally advised Trump against making the condolence calls, as it is one of the most difficult things anyone can do. Upon hearing that Kelly did not receive a condolence call from President Barack Obama, however, Trump made up his mind and asked for advice how to proceed.

Kelly shared the message he was given, by his friend Joseph Dunford ‒ now chairman of the Joint Chiefs of Staff ‒ about how his son Robert was “doing exactly what he wanted to do” and “knew what he was getting into.”

That was the message Trump communicated to Sergeant Johnson’s widow, Kelly said.

After seeing media reports about the phone call, Kelly said he spent an hour and a half visiting the finest people he knew - among the gravestones at Arlington National Cemetery, “some of whom I put there, for they were doing what I told them to do when they were killed.”

Many things that he considered sacred growing up are not respected any more, the retired general said. “The selfless devotion that brings a man or a woman to die on the battlefield, I just thought that might be sacred.”

Kelly then brought up a 2015 dedication of a FBI building in Miami, Florida, when the same lawmaker spoke “in the long tradition of empty barrels making the most noise.”

He answered only a few questions from the press corps afterward, limiting them to reporters who were either related to, or knew someone who had died in military service.