TEHRAN, October 26 -There was little left of Raqqa by the time the Syrian Democratic Forces (SDF) officially announced the city had been taken from the Islamic State of Iraq and the Levant group (ISIL) last week. 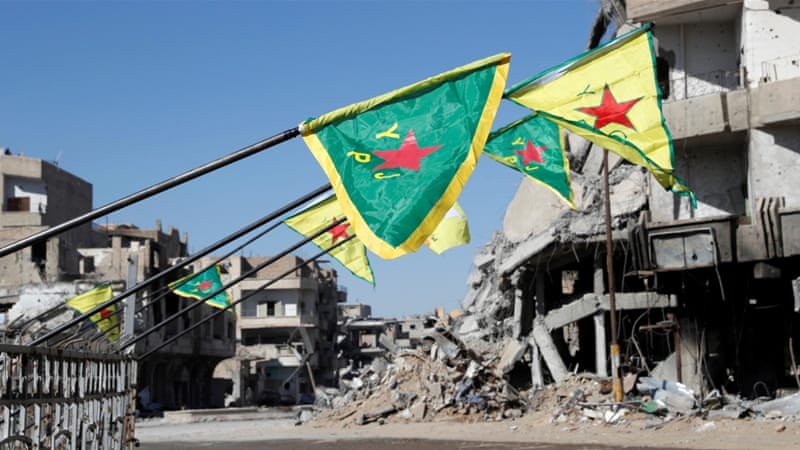 TEHRAN, Young Journalists Club (YJC) -There was little left of Raqqa by the time the Syrian Democratic Forces (SDF) officially announced the city had been taken from the Islamic State of Iraq and the Levant group (ISIL) last week.

It was a huge symbolic victory and deprived the armed group of a de facto capital once central to everything from its propaganda videos to the planning of attacks abroad.

SDF fighters celebrated accordingly, as did their backers in Washington, who supplied them with weapons, vehicles and formidable military support. But the triumph was fleeting, the fight against ISIL (also known as ISIS) continues and the SDF will have a new role in Syria's intractable war.

The US-led anti-ISIL coalition pounded Raqqa as the SDF closed in, launching some 4,570 missiles, shells and bombs at a shrinking patch of territory held by the group in September alone.

The UN estimates that 300,000 residents had fled since April and thousands more were trapped in the city as the fighting raged. Monitoring groups report that around 1,800 civilians were killed.

The city is now nearly deserted and buildings still standing amongst the rubble are scarred, blackened and riddled with ISIL mines and booby-trapped explosives.

A spokesperson for the coalition's public affairs office described dealing with this deadly legacy as "the number one challenge" in the city.

"SDF forces continue to play an important role in Raqqa by clearing devices left behind by ISIL terrorists with the intent to kill and maim indiscriminately," the spokesperson told Al Jazeera.

But the SDF is unlikely to be a long-term presence in the city. As a Kurdish-led, often-secular force, some local residents met its deployment to predominantly Sunni Arab areas with suspicion. Instead, the Raqqa Civilian Council (RCC), a group of Sunni leaders formed in April with American support, is set to take control.

It is the RCC that will be responsible for basic steps towards making the town habitable again, such as securing clean water, and clearing the streets.

Rebuilding will cost billions and it is unclear where that money will come from. Without it, however, the RCC is unlikely to be able to make major strides, says Lina Khatib, director of Chatham House's Middle East and North Africa programme.

"The US is grooming the Raqqa Council to play a role in post-ISIS governance but the Council does not yet have enough capacity to do so or funding for reconstruction," she told Al Jazeera.

"The Raqqa Council requires significantly more support in order to meet both the needs and expectations of Raqqa residents."

Race for the oil fields

Even as they continue to clear Raqqa, the SDF and its American allies are already involved in more anti-ISIL operations. The immediate priority is oil-rich Deir Az Zor province, where Syrian government forces, backed by Russia and Iran are also battling the group.

These two sides are now racing to take strategic ground. The SDF is now progressing rapidly in northern and eastern regions of the province and this week took control of Omar oil field, Syria's largest.

Government troops were also advancing on the field and being beaten to it will undoubtedly have angered Syrian President Bashar al-Assad. For now though, the SDF are happy. "Everything is going according to our plan," SDF spokesman Mustafa Bali told Al Jazeera.

The SDF and government troops have largely avoided contact so far, confining themselves to different sides of the Euphrates and adhering to deconfliction lines also observed by their supporting American and Russian airpower.

Both Moscow and Washington have already accused each other of firing on their proxies, however.

Meanwhile, Assad has vowed to retake the whole of Syria from rebel groups, which would seemingly include the semi-autonomous Kurdish region.

As these rival forces squeeze ISIL from two sides, the chances of direct contact and subsequent clashes increase.

America's recent Syria policy has tended to prioritise the fight against ISIL and this remains its short term goal, the coalition spokesperson said.

"[The Coalition] is focused on defeating ISIS in designated areas of Iraq and Syria thereby setting the conditions for follow-on operations to increase regional stability. We are making steady, measurable progress to that end.

"We will continue to enable the SDF by advising and assisting their leadership, by providing intelligence, surveillance and reconnaissance support and through precision air and ground fires against military targets."

But critics suggest that the ISIL focus ignores more complex regional dynamics and could result in empowering rivals such as Iran.

The US has yet to outline a post-ISIL military strategy and remains unclear on what it considers an acceptable outcome for the areas in which it currently operates.

Trump launched a cruise missile attack against a Syrian airfield in response to Assad's use of chemical weapons, but the US has softened calls for regime change.

If the US rapidly ramps down operations after defeating ISIL, the SDF will be unlikely to hold ground against government troops backed by Russian air power.

Kurdish fears of US abandonment are unlikely to be fulfilled for now, according to Christopher Meserole, a fellow in the Center for Middle East Policy at the Brookings Institution, because the US is likely to want a source of influence to counter Moscow, Tehran and Damascus as well as group's such as the local al-Qaeda affiliate.

"The US has flaked out on the Kurds in the past, so it's understandable that they're worried about US withdrawal in Syria now," Meserole told Al Jazeera.

"But in this case the US won't be going anywhere for a while. Once ISIL is defeated, the US will need proxy forces on the ground to push back against both Assad and Russia."