TEHRAN, November 26 -Gunmen who attacked a mosque on Friday in Egypt’s North Sinai brandished an IsIs flag as they opened fire through doorways and windows, killing more than 300 worshippers, including two dozen children, officials said on Saturday. 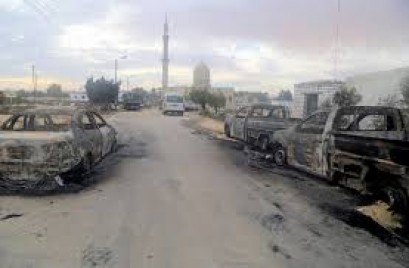 TEHRAN, Young Journalists Club (YJC) -Gunmen who attacked a mosque on Friday in Egypt’s North Sinai brandished an IsIs flag as they opened fire through doorways and windows, killing more than 300 worshippers, including two dozen children, officials said on Saturday.

No group has claimed responsibility, but Egyptian forces are battling a stubborn IsIs affiliate in the region, one of the surviving branches of the militant group after it suffered defeats by U.S.-backed forces in Iraq and Syria.

The assault on a mosque has stunned Egyptians, prompting President Abdel Fattah al-Sisi’s government to tighten security at places of worship and key buildings, and call three days of mourning for the bloodiest attack in Egypt’s modern history.

State news agency MENA said the death toll had risen to 305, including 27 children, and 128 people were injured.

“The worshippers were taken by surprise by these elements,” the prosecutor said in a statement. “They numbered between 25 and 30, carrying the Daesh flag and took up positions in front of the mosque door and its 12 windows with automatic rifles.”

The gunmen, some wearing masks and military-style uniforms, had arrived in jeeps, surrounded the mosque and opened fire inside, sending panicked worshippers scrambling over each other to escape the carnage.

Witnesses had said gunmen set off a bomb at the end of Friday prayers and then opened fire as people tried to flee, shooting at ambulances and setting fire to cars to block roads. Images on state media showed bloodied victims and bodies covered in blankets inside the mosque.

“When the shooting began everyone was running, and everyone was bumping into one another,” Magdy Rezk, a wounded survivor, said from his hospital bed. “But I was able to make out masked men wearing military clothing.”