TEHRAN, October 29 - The head of the International Atomic Energy Agency (IAEA) Yukiya Amano says Iran is living up to all its obligations under the 2015 nuclear deal, known as the Joint Comprehensive Plan of Action (JCPOA). 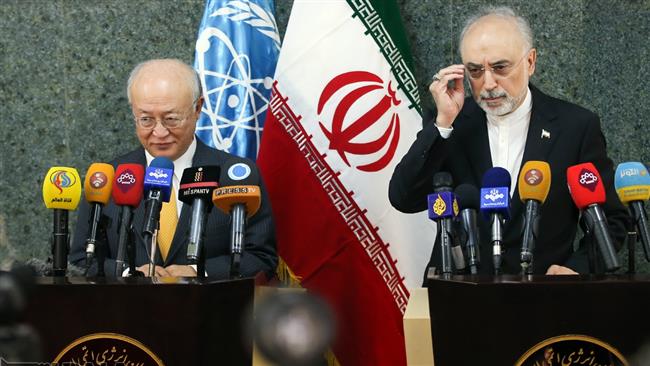 TEHRAN, Young Journalists Club (YJC) - “All those involved in the JCPOA are honoring their commitments,” he said in Tehran Sunday during a joint press conference with head of the Atomic Energy Organization of Iran (AEOI) Ali Akbar Salehi.

Since January 2016, he said, the IAEA has monitored Iran’s nuclear commitments under the JCPOA and conducted verification checks.

“The Agency believes that the JCPOA is an important achievement for verification. The Agency could stipulate that Iran’s nuclear commitments under the JCPOA are being implemented,” he added.

Salehi, for his part, said that he had exchanged views with Amano about Section T of the JCPOA, which deals with the technology that could contribute to the development of a nuclear explosive device.

Iran’s nuclear chief stressed that Section T does not include special inspections, but the opposite side is making its own special interpretation of the provision.

“We can produce uranium enriched at 20 percent within four days, but we do not want the JCPOA to collapse,” Salehi said.

Amano is in Tehran for talks with Iranian officials as part of the regular dialog between the two sides.

According to the IAEA, discussions were expected to focus on the verification and monitoring of the implementation of the JCPOA.

Behrouz Kamalvandi, the spokesman for the Atomic Energy Organization of Iran (AEOI), said Amano’s talks would be about “political and nuclear topics related to the terms of the JCPOA.”

Eight IAEA reports have confirmed Iran’s full commitment to its side of the bargain since January 2016 when the agreement between Iran and the P5+1 group of the US, Britain, France, China, Russia and Germany went into effect.

“Amano is aware of Iran’s honesty and adherence to its obligations under the JCPOA and knows that we have not infringed or violated our tasks regarding nuclear issues,” Kamalvandi said.

The US which is the other party to the agreement has however failed to fulfill its commitments, with President Donald Trump threatening to withdraw Washington from the deal.

Earlier this month, Trump refused to formally certify Iran’s compliance with the nuclear accord and warned that he might ultimately "terminate" it, putting the fate of the deal in limbo.

Now, the US Congress should decide whether to reimpose economic sanctions on Tehran that were lifted under the nuclear agreement.

The US has also demanded inspections of Iran’s military sites, which the Islamic Republic has vehemently rejected, Presstv reported.

Iran says demands to access its military sites are aimed at politicizing the JCPOA, stressing that its defense capabilities are not up for negotiation and bargaining.

On Saturday, Kamalvandi urged the IAEA to fulfill its duties in a “professional and independent” way without bowing to any “political pressure.”

Under the deal signed in July 2015, Iran undertook to apply certain limits to its nuclear program in exchange for the termination of all nuclear-related sanctions.