TEHRAN, November 3 -Long, snaking lines formed outside Apple Inc stores in Asia early on Friday as fans flocked to buy the new iPhone X, a turnout that contrasts with the more lackluster launches for the past two iterations of the premium smartphone. 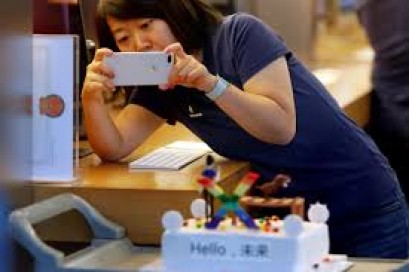 TEHRAN, Young Journalists Club (YJC) -Long, snaking lines formed outside Apple Inc stores in Asia early on Friday as fans flocked to buy the new iPhone X, a turnout that contrasts with the more lackluster launches for the past two iterations of the premium smartphone.

In Australia, around 400 people queued outside Apple’s flagship store in central Sydney to pay A$1,579 ($1,218) for the 10th-anniversary model, a glass-and-stainless-steel device that Chief Executive Officer Tim Cook billed as “the biggest leap forward since the original iPhone.”

“It’s beautiful bro, what a feeling, I‘m excited,” builder Bishoy Behman, 18, told Reuters after picking up two iPhone X as the first in line. He said he camped outside the store for a week before paying to improve his place in the queue overnight.

The iPhone X comes a decade after the original iPhone, the product that powered Apple’s rise to become the world’s biggest technology company with a market capitalization of $868 billion.

The firm opened pre-orders on Oct. 27 and has said demand was “off the charts.” The handset features an edge-to-edge display designed for deeper color rendition and an innovative camera for face-recognition identification.

Analysts have expressed concern that supply issues might stop Apple satisfying early demand. The camera, for instance, has never before been manufactured in the volume Apple demands.

Chief Financial Officer Luca Maestri told Reuters on Thursday that Apple was “quite happy” with how manufacturing of the iPhone X was progressing.

“Production is growing every week, and that’s very, very important during a ramp period,” he said.

In Apple’s Omotesando store in Tokyo, some 550 people were waiting in a line stretching to around 600 meters.

“I‘m going home, and after having a rest, I’d like to have fun (with the phone),” said first-in-line Yamaura, a 21-year-old college student who spent six days in the queue.

In Singapore, two tourists from Thailand - which is not an initial launch market - were the first to receive pre-ordered phones at a flagship store in the Orchard shopping district.

Arbitrage traders were also in line in an attempt to take advantage of the strong demand. In Hong Kong, some buyers quickly resold iPhone X handsets for a profit, but the resale premium eased as waiting times fell and supply concerns eased.

K Yip in Hong Kong told Reuters his chain of small telecoms shops bought around 500 iPhone Xs for resale, mostly to mainland Chinese, but said the iPhone buzz was not as frenzied as before.

Zhou Ying, a Beijing-based iPhone trader since 2010, echoed the sentiment.

“It is getting harder and harder for us to scalp iPhones. It is not the same as before,” Zhou said, adding she bought two at a premium of 300 yuan and hoped to make several hundred yuan in profit through resale.

Lines also started to form outside Apple’s New York City stores on Thursday evening, with a salesperson at one shop in the Upper West Side telling Reuters about 20 people had queued up so far.

The most immediately noticeable change to the iPhone X from previous models is the removal of the physical home button and fingerprint sensor formerly used for unlocking. Instead, the iPhone X is unlocked with a so-called Face ID system, in which the user looks into a depth-sensing camera.

“I thought not having a home button would be an adjustment, but the new gestures are easy to learn and very natural,” IT worker Greg Johnson told Reuters after testing his new phone in Sydney.