China: South China Sea disputes not an issue with US

TEHRAN, November 3 -A senior Chinese official says territorial disputes between China and a number of other countries in the South China Sea are not an issue between Beijing and the United States, adding that Washington is expected to make a positive contribution over the matter and not cause more trouble. 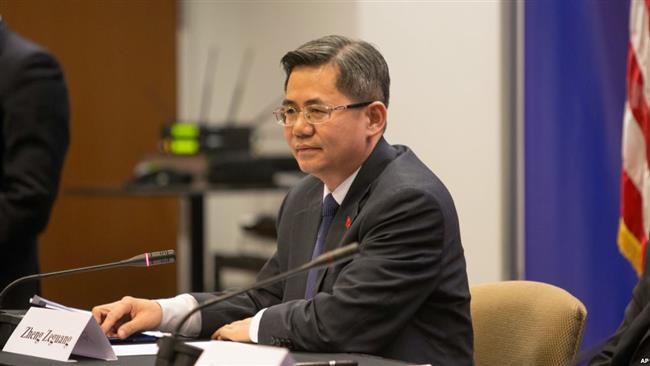 TEHRAN, Young Journalists Club (YJC) -Ahead of a visit to China by US President Donald Trump next week, Chinese Vice Foreign Minister Zheng Zeguang said on Friday, “The South China Sea issue isn’t an issue between China and the United States.”

Zheng hoped Washington could objectively view what he said were positive developments in the South China Sea and respect the efforts by China and Southeast Asian countries to safeguard peace and stability there.

“We hope that as an external party, the United States can plant more flowers and fewer thorns, help and not cause problems,” he said.
Washington, an extra-regional power, often takes sides with China’s rival claimants in the Sea. Those other countries are Vietnam, Taiwan, the Philippines, Malaysia, and Brunei. The US also accuses China of attempting to assert control over the region, which is believed to be rich in oil and gas reserves.
China, however, rejects the allegations and accuses the US of interfering in the affairs of a region it does not belong to and deliberately stirring up tensions there.

From time to time, Washington sends its warships to the region to protect it calls “freedom of navigation” in the South China Sea.

Zheng also said that Beijing had no issue with freedom of navigation in the South China Sea but it opposed parties using it as an “excuse” to harm China’s sovereignty and security interests.

In a related development, China’s Assistant Foreign Minister Chen Xiaodong said Beijing had reached an agreement with Vietnam on managing their dispute in the South China Sea through friendly dialog.

Chen said in a news briefing on Friday that the leaders of China and Vietnam had had many “deep, frank” discussions on maritime issues, on which they “reached an important consensus.”

Chinese President Xi Jinping will pay a visit to Vietnam next week to attend a summit of Asia Pacific leaders, Chen also said.

“Both sides will uphold the principle of friendly consultations and dialog to jointly manage and control maritime disputes, and protect the bigger picture of developing Sino-Vietnam relations and stability in the South China Sea,” he said.

China and Vietnam are traditional allies, but they have been engaged in a dispute over territory in the South China Sea.