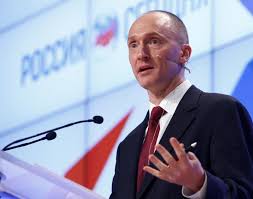 In numerous media interviews in recent months, the adviser, Carter Page, has either denied meeting Russian government officials during a July 2016 trip to Moscow or said he met “mostly scholars,” the newspaper said.

Page sent an email to at least one Trump campaign aide describing his insights after conversations with Russian government officials and others, the Times reported, citing a person familiar with the message.

The newspaper said the email was read aloud during the closed-door testimony on Thursday to the House of Representatives Intelligence Committee, which is investigating efforts by Russia to tip the November 2016 election in Trump’s favor and possible collusion between the Trump campaign and Russia.

Russia says it did not interfere in the election and Trump has denied any collusion.

Page played down the significance of the meetings in an interview with the Times on Friday.

“I had a very brief hello to a couple of people. That was it,” he said. Page said one of the people he met was a “senior person,” but would not confirm the person’s identity.

Special counsel Robert Mueller, who has impaneled a grand jury in his probe of the collusion allegations, charged Trump’s former campaign manager Paul Manafort and another aide, Rick Gates, with money laundering on Monday.

It was announced the same day that another Trump adviser, George Papadopoulos, had pleaded guilty early in October to lying to the FBI.

Page was questioned by the FBI earlier this year and has also appeared before the grand jury as part of the special counsel’s probe, the Times said.