‘I don’t like him’: Bush presidents, Snr & Jr, lash out at ‘blowhard’ Trump

TEHRAN, November 5 - Established etiquette dictates that former US presidents keep their counsel when asked for comment on the actions of the new man in the Oval Office – but these are no ordinary times. 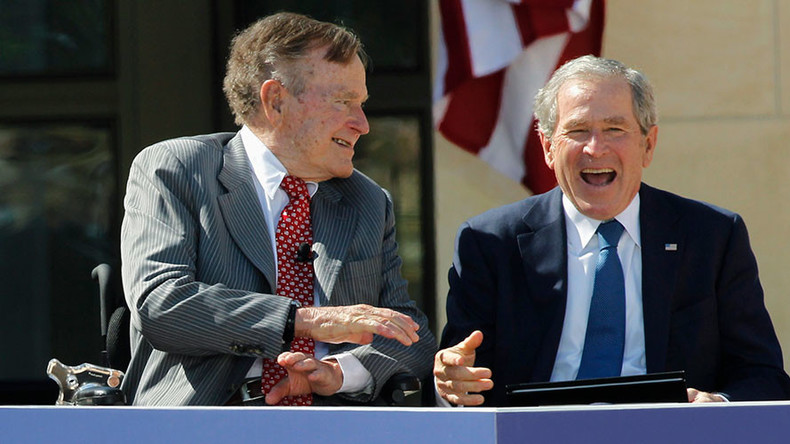 TEHRAN, Young Journalists Club (YJC) -Presidents George H.W Bush and George W Bush, the 41st and 43rd commanders in chief, have delivered a scathing critique of Donald Trump’s impact on the Republican Party, with the elder Bush labelling the billionaire-turned-politician “a blowhard.”

The pair were quoted in “The Last Republicans,” a book by author Mark Updegrove detailing the relationship between the presidents and chronicling the Bush family’s control of the presidency and the vice-presidency over 16 years.

“I don’t like him,” George Bush Snr said in May 2016 as cited to the New York Times on Saturday. “I don’t know much about him, but I know he’s a blowhard. And I’m not too excited about him being a leader.”

It was also revealed that neither of them voted for Donald Trump, with George H.W. Bush crossing party lines to vote for Democrat Hillary Clinton. Bush Jnr, meanwhile, said he voted for “none of the above.”

Never one to let personal criticism go unchallenged, Trump replied in a statement to CNN.

“If one Presidential candidate can disassemble a political party, it speaks volumes about how strong a legacy its past two presidents really had,” the statement read. “And that begins with the Iraq war, one of the greatest foreign policy mistakes in American history.”

This is not the first time that Trump has been at the heart of the former president’s comments in recent weeks. Speaking at the George W. Bush Institute in New York last month, Bush Jnr delivered what was seen as a coded attack on the US president.

“Bigotry seems emboldened,” he said. “Our politics seems more vulnerable to conspiracy theories and outright fabrication.” Later he added: "Bullying and prejudice in our public life... provides permission for cruelty and bigotry."

Bush Snr and Jnr, the only two living Republican presidents, also delivered a statement that was seen as a veiled criticism of Donald Trump’s comments following the white supremacist rally in Charlottesville, Virginia, in August.