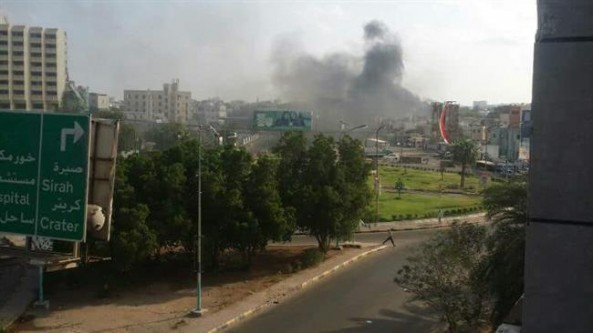 A high-ranking member of pro-Hadi forces said a car bomb exploded outside the security headquarters in in Aden's Khur Maksar district on Sunday.. Local residents said clashes erupted in the area immediately.

In a second incident moments later, gunmen stormed the Aden criminal investigations unit and set alight the files stored there, as a bomber set off his explosive belt in the building, according to a source in the unit.

Aden is dominated by pro-Hadi Yemeni forces, backed by the United Arab Emirates, which is a key member of the Saudi-led military campaign on Yemen.

However, there have been some indications that Saudi Arabia and the UAE disagree on a number of issues over the war on Yemen, among them the control of Aden International Airport.

In another development on Sunday, Saudi jets conducted fresh airstrikes on Yemen.

The air raids left two people dead and two more injured in the northern province of Amran and also destroyed al-Sabeen Square, the main square of national celebrations in the Yemeni capital, Sana’a.

The Saudi-led war, which began in March 2015, has been accompanied by a naval and aerial blockade on Yemen. It has so far killed over 12,000 people and led to a humanitarian crisis.

The Riyadh regime launched the offensive to eliminate Yemen’s Houthi movement and reinstall a Riyadh-friendly regime there.

The campaign, however, has failed to achieve its goals despite spending billions of dollars.