Yemen cancels all flights due to Saudi blockade of impoverished country

TEHRAN, November 6 - All flights to and from the war-torn Yemen have been canceled after the Saudi Arabia-led military coalition, which has been pounding the impoverished country for over two and a-half years, announced the closure of all land, air and sea ports in Yemen. 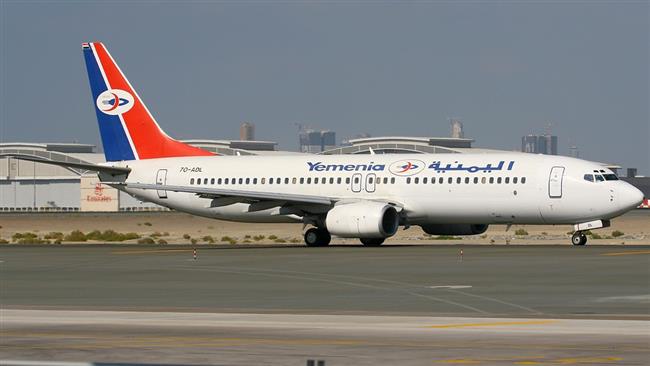 TEHRAN, Young Journalists Club (YJC) - Yemenia, the flag carrier airline of Yemen, announced the decision on Monday, saying the Saudi-led coalition had denied permission to fly out of the remaining two functional airports of the country, located in the cities of Aden, in the southwestern province of Aden and Say'un, in the central province of Hadhramaut.

Both cities are situated in areas that are under the control of coalition allies, which are also loyal to Yemen’s former president Abd Rabbuh Mansur Hadi, a staunch ally of the Riyadh regime. Yemen’s main international airport in capital Sana’a has also been shut down since August 2016 by order of the coalition.

Saudi military authorities say the missile was fired at an international airport by Houthi fighters, who are on the forefront of fighting against the Saudi war machine since 2015, but was intercepted.

“Shattered fragments from the intercepted missile landed in an uninhabited area of the airport and there were no injuries,” said a spokesman for the Saudi-led coalition waging war against Yemen at the time.

The Houthi forces have launched a number of long-range missiles across the border in recent years. However, Saturday's strike appeared to be the deepest yet within Saudi territory.

Saudi-led coalition further alleged that Iran had been behind the strike through its support of Houthis, saying it could be “considered as an act of war.” Iran was quick in dismissing Saudis’ allegations as a “lie”, saying Riyadh was resorting to “destructive, irresponsible, provocative and baseless” allegations after failing to achieve its “ominous aims” in Yemen.

Colonel Aziz Rashed, a spokesman for the Yemeni army, said in a statement early on Sunday that the missile was launched in retaliation for the “massacres committed by the US-Saudi coalition in Yemen.”

Since March 2015, the Saudi regime has been heavily bombarding Yemen as part of a brutal campaign against its impoverished southern neighbor in an attempt to reinstall Hadi and crush the Houthi Ansarullah movement, which is in control of large parts of Yemen, including the capital. The Saudi campaign, however, has failed to achieve its goals.

Over the past two years, Houthis have been running state affairs and defending Yemeni people against the Saudi aggression.

Latest figures show that the war has so far killed over 12,000 Yemenis and wounded thousands more. The Saudi aggression has also taken a heavy toll on the country's facilities and infrastructure, destroying many hospitals, schools, and factories.

Certain Arab countries, including the United Arab Emirates (UAE) and Bahrain, are key partners to the campaign, which lacks any international mandate and has faced increasing criticism.

Saudi Arabia has also imposed a total embargo on Yemen, causing severe shortages of food and medicine. A recent cholera epidemic has been blamed on those shortages.