Israel calls on Arab states to befriend Israel, team up against Iran

TEHRAN, November 19 -Israeli minister of military affairs has extended the hand of friendship to Arab countries, calling on them to form an alliance against Iran. 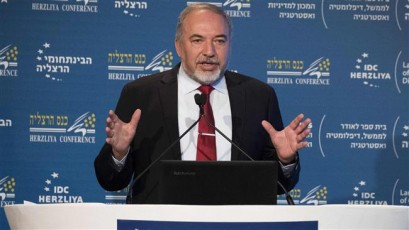 TEHRAN, Young Journalists Club (YJC) -Israeli minister of military affairs has extended the hand of friendship to Arab countries, calling on them to form an alliance against Iran.

Avigdor Lieberman wrote on his Facebook page on Saturday that the Middle East region now requires an anti-Iran coalition.

He also hailed former Egyptian President Anwar Sadat as “a courageous leader who stood against the tide,” urging Arab leaders to follow in his footsteps to visit Jerusalem al-Quds and sign a peace deal with Israel.

“40 years after his (Sadat’s) historic visit to Israel, I call on leaders in the region to follow the path of President Sadat, come to Jerusalem (al-Quds) and open a new chapter, not just in terms of Israel’s relations with the Arab world, but for the whole region,” Lieberman wrote.

In November 1977, Sadat became the first Arab leader to visit the occupied territories, where he met with then Israeli Prime Minister Menachem Begin, and spoke before the parliament, known as the Knesset, sparking anger in the Muslim world.

“The Middle East today needs, more than anything else, a coalition of moderate states against Iran. The coalition against Daesh [terror outfit] has finished its work, after Daesh, Iran,” Lieberman said.

The Tel Aviv regime has been accused of colluding with terrorist groups, such as Daesh, which is currently losing ground against the Syrian army.

In the past few years, Israel has frequently attacked military targets in Syria in what is considered as an attempt to prop up militants who have been suffering heavy defeats against pro-Damascus troops.

On several occasions, the Syrian military has confiscated Israeli-made arms and military equipment from militants. Israel has also been providing medical treatment to the Takfiri elements wounded in Syria.

In an interview with the Saudi-owned Elaph online newspaper, Eizenkot claimed that Iran was the "biggest threat to the region,” noting that Tel Aviv and Riyadh were in full agreement about Iran's intentions.

Israel has no full diplomatic relations with Arab countries, except with Egypt and Jordan. However, recent reports suggest an Israel-Saudi rapprochement.Back in June, Lieberman called for a deal with Arab countries, including Saudi Arabia, as a prerequisite for any agreement to resolve the decades-long conflict with the Palestinians.

He further underlined the need for "a full regional agreement” with what he called “all moderate Sunni states, including Kuwait and Saudi Arabia.”