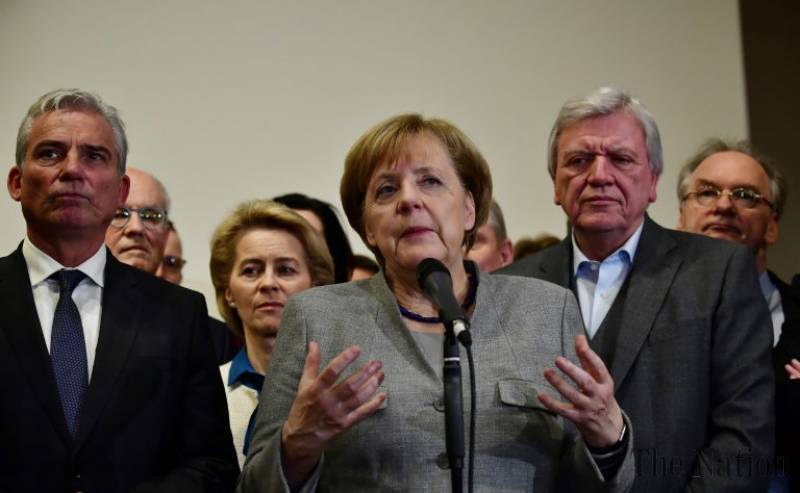 And with no other viable coalition in sight, Germany may be forced to hold new elections that risk being as inconclusive as September's polls.

Merkel had been forced to seek an alliance with an unlikely group of parties after the ballot left her without a majority.

But following more than a month of gruelling negotiations, the leader of the pro-business FDP, Christian Lindner, walked out of talks, saying there was no "basis of trust" to forge a government with Merkel's conservative alliance CDU-CSU and ecologist Greens.

"It is better not to govern than to govern badly," he said, adding that the parties did not share "a common vision on modernising" Germany .

Voicing regret for the FDP's decision, Merkel vowed to steer Germany through the crisis.

"As chancellor... I will do everything to ensure that this country comes out well through this difficult time," she said.

The Greens' leaders also deplored the collapse of talks, saying they had believed a deal could be done despite the differences.

The euro fell following the news, although analysts said the longer-term implications for the currency were not yet clear.

'Failure in the air'

The negotiations, which turned increasingly acrimonious, had stumbled on a series of issues including immigration policy.

Merkel's liberal refugee policy that let in more than a million asylum seekers since 2015 had also pushed some voters to the far-right AfD.

The parties also differed on environmental issues, with the ecologists wanting to phase out dirty coal and combustion-engine cars, while the conservatives and FDP emphasized the need to protect industry and jobs.

Party chiefs had initially set a deadline of 6:00 pm (1700 GMT) on Sunday, but that passed without a breakthrough -- after already missing a previous target on Thursday.

But signs that talks were going badly began emerging and Bild daily said on its website that "failure is in the air" as the parties dug in their heels on key sticking points.

Merkel could now try to convince the Social Democratic Party, which has been the junior coalition partner in her government since 2013, to return to the fold.

But after suffering a humiliating loss at the polls, the party's top brass has repeatedly said the SDP's place was now in the opposition.

Merkel, who has been in power for 12 years, could also lead a minority government although she had signaled that she was not in favor of such instability.

Germany could therefore likely be forced to hold new elections.

But that is not without peril for Merkel, who would face questions from within her party on whether she is still the best candidate to lead them into a new electoral campaign.

Top-selling Bild daily said earlier Sunday that a failure to forge a tie-up -- dubbed a "Jamaica coalition " because the parties' colours match those of the Jamaican flag -- puts "her chancellorship in danger".

A poll by Welt online also found that 61.4 percent of people surveyed said a collapse of talks would mean an end to Merkel as chancellor. Only 31.5 percent thought otherwise.

As coalition talks dragged out without a breakthrough, Germany 's President Frank-Walter Steinmeier issued a warning to parties in the talks.

"All sides are aware of their responsibilities. And this responsibility means not returning their mandate to voters," he said in an interview with Welt am Sonntag.

Sueddeutsche daily noted that Steinmeier's warning came because he sees in new elections "the risk that even a bigger coalition or a Jamaica coalition would no longer have a majority".

"Then the loss would have been greater than the failure of forging a government," it said.