TEHRAN, November 25 -Two senior Saudi Arabian officials, both of whom formerly served as government ministers, have reportedly visited a synagogue in the French capital in what Israeli media have depicted as “a historic first.” 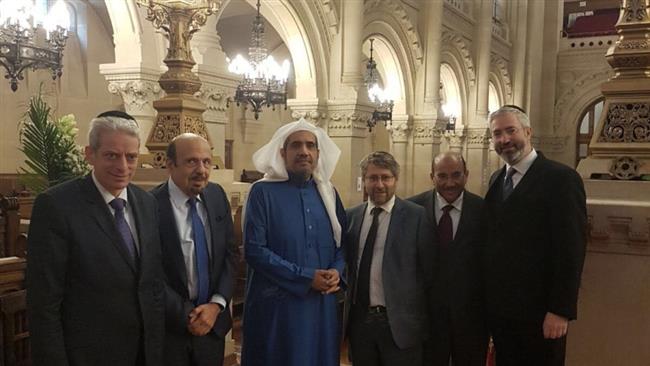 TEHRAN, Young Journalists Club (YJC) - Two senior Saudi Arabian officials, both of whom formerly served as government ministers, have reportedly visited a synagogue in the French capital in what Israeli media have depicted as “a historic first.”

Israeli daily The Jerusalem Post reported on Thursday that Muhammad bin Abdul Karim Issa, who is the head of a Saudi government-funded organization and a former justice minister, and Saudi Ambassador to France Khalid bin Mohammed al-Angari, an ex-education minister, had made their visit to the grand synagogue of Paris this week.

Issa is also an official adviser to the royal court in Riyadh and to the Saudi Crown Prince Mohammed bin Salman.

The visit came amid numerous reports suggesting growing ties between Tel Aviv and Riyadh. The two sides have no diplomatic relations but are known to be in secret contact.

While there have been many reports of those secret ties, individual instances of Saudi overtures to the Israeli regime are often depicted as singular and “surprising” incidents.

The two Saudi officials who visited the Paris synagogue were hosted by France’s chief rabbi, Haim Korsia, and the synagogue’s rabbi, Moshe Sebbag. Sebbag expressed “surprise” over the visit.

“This was very exciting. This was their first time in a synagogue, and I was frankly surprised that they came,” he said.

Earlier this week, Israeli Prime Minister Benjamin Netanyahu said the Israeli regime had “secret” but “fruitful” cooperation with Arab governments, noting that peace between his regime and Arab capitals would “happen in the end.”

His comments came one day after Israeli minister of military affairs Avigdor Lieberman called on Arab states to befriend Israel and team up against Iran.

On November 16, Chief of Staff of Israeli military, Lieutenant General Gadi Eizenkot, said Tel Aviv was ready to share intelligence with Saudi Arabia in their joint efforts to confront Iran.

He said that in a first ever interview by an Israeli military official with a Saudi media outlet.

On November 14, Lebanon’s al-Akhbar newspaper published a secret undated letter from Saudi Foreign Minister Adel al-Jubeir to Crown Prince Mohammed bin Salman, in which Jubeir put forward a plan to normalize ties with Israel despite “risks” of a public backlash.

Back in September, reports emerged about a secret visit by bin Salman to Israel, where he held consultations with senior Israeli officials over “regional peace.” However, an official source at the Saudi Foreign Ministry denied the news.

Earlier this week, Israeli blogger Ben Tzion claimed he had made secret visits to holy Muslim sites in Saudi Arabia, Iran, Lebanon, and Jordan. He reportedly holds a Russian passport.

He posted photos of himself inside the al-Masjid an-Nabawi in Medina, Saudi Arabia, in which he can be seen pointing to his name written in Hebrew.

Observers say the increasingly public but informal contact between Israeli and Saudi officials, such as the synagogue visit, are attempts to test the waters before Riyadh and Tel Aviv potentially declare open relations.