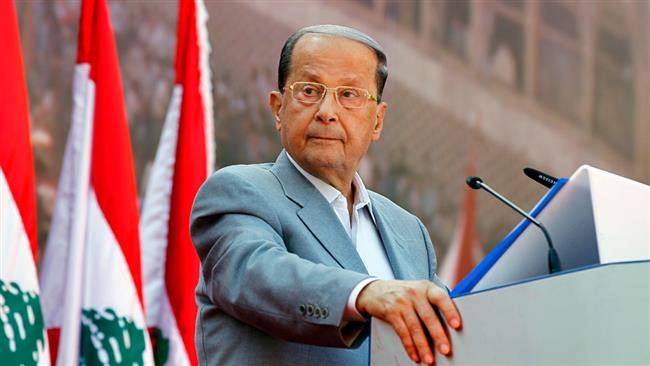 TEHRAN, Young Journalists Club (YJC) - President Aoun made the remarks via his official Twitter account on Monday, a day after Arab League Secretary-General Ahmad Aboul Gheit announced at a press conference in the Egyptian capital of Cairo that Arab states had agreed to designate Lebanon’s Hezbollah resistance movement a “terrorist organization.”

Being a member of Lebanon’s coalition government, the popular Hezbollah movement, which currently holds 14 of the 128 seats at the parliament of Lebanon, has been a strong aid to the Lebanese army in thwarting any Israeli aggression against the country.

Back in 2000, the resistance movement successfully forced Israel to withdraw from southern Lebanon.

Hezbollah is also playing a major role in fighting against foreign-backed Takfiri terrorist groups, which have been wreaking havoc in neighboring Syria for the last six years.

The Arab League’s extraordinary general meeting on Sunday was held at the request of Saudi Arabia, which has assumed an aggressive stance against Hezbollah for its alleged links to Iran, Riyadh’s powerful rival in the region. Riyadh associates Hezbollah with Iran and has been trying to weaken the resistance movement, which is Lebanon's de facto deterrent force against Tel Aviv.

In its concluding resolution, the Arab League announced that Arab foreign ministers, excluding those of Lebanon and Iraq, would hold Hezbollah responsible for supporting “terrorist groups” across the region.

Furthermore, it also blamed the Lebanese government for aiding and supporting the resistance group, accusing Beirut of being an accomplice to what Hezbollah is doing.

However, in a separate tweet on Monday, Aoun strongly defended Hezbollah, saying he “cannot accept suggestions that Lebanon’s government is a partner in acts of terrorism.”

The accusations leveled by Saudi-dominated Arab League against Hezbollah echoes exactly what Israel alleges against the resistance movement, strongly suggesting Riyadh is trying hard to help the Israeli entity by weakening Hezbollah.

The developments came some two weeks after Lebanese Prime Minister Saad Hariri announced his shock resignation in a televised address aired from the Saudi capital, shortly after he arrived there for a visit, repeating the same accusations against Hezbollah. After resigning, Hariri spent two more weeks in Saudi Arabia amid rumors he was under house arrest there, before traveling to Paris on Saturday.

After meeting with French President Emmanuel Macron, Hariri promised to be in Lebanon in time to mark its independence day on Wednesday. His awkward decision, however, has already plunged the country into political turmoil.

Meanwhile, the Arab League’s head said that Lebanon should be “spared” from spiraling regional tensions after arriving in Beirut to meet with Aoun.

“Arab countries understand and take into account the situation in Lebanon and want to spare it ... from any dispute,” said Aboul Gheit.

Leader of Lebanese Hezbollah movement, Sayyed Hassan Nasrallah, is set to give a speech, most likely on the Arab League’s latest resolution and the recent regional developments, later in day.