TEHRAN, November 27 -Israel has approved the creation of a hiking trail through the occupied West Bank and Golan Heights - a stretch of land which includes Palestinian and Syrian territories illegally held by Tel Aviv. 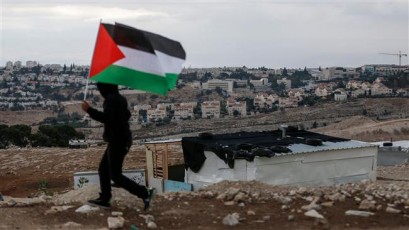 TEHRAN, Young Journalists Club (YJC) -Israel has approved the creation of a hiking trail through the occupied West Bank and Golan Heights - a stretch of land which includes Palestinian and Syrian territories illegally held by Tel Aviv.

"The new route will pass through the Old City of Jerusalem [al-Quds] or Shilo (north of the West Bank), places full of Jewish history," Tourism Minister Yariv Levin claimed on Sunday.

Prime Minister Benjamin Netanyahu welcomed the decision, hailing it as "imperative in terms of tourism potential."

Israel occupied the West Bank and seized Golan Heights from Syria during the 1967 Six-Day War and later annexed them in a move that has never been recognized by the international community.

Following the funding approval, a committee composed of various ministries must now submit proposals for the project.

Earlier this month, the Israeli military threatened to launch an incursion into Syria after a village in the Golan Heights was stormed by Nusra Front terrorists.

The attack and the subsequent Israeli threat triggered protests in Druze-populated areas held by Israel across the Syrian border, with residents saying Tel Aviv was using the incident as a pretext to occupy Hader village.

Meanwhile, the European Union slammed Israel for the destruction of Palestinian structures in the West Bank after the military issued orders against three Palestinian herding communities.

“The EU missions in Jerusalem [al-Quds] and Ramallah deplore the continuing threat of demolitions and seizures of Palestinian structures in the occupied West Bank,” it said in a statement on Sunday.

The Israeli military issued orders against Palestinians in the communities of Ein al-Hilweh and Umm Jamal in the northern Jordan Valley and the community of Jabal al-Baba, which is located just outside the Ma’aleh Adumim settlement, next to Jerusalem al-Quds. The orders threaten the properties of up to 400 people.

The EU also condemned Tel Aviv’s intention to demolish some 20 structures in the Palestinian village of Sussiya in the South Hebron Hills.

“As winter arrives, an imminent demolition [in Sussiya] will leave up to 100 people, half of them children, without shelter,” it said.

“Two European donor-funded schools in Wadi as Seeq and al-Muntar are presently under threat of destruction and seizure,” the statement added.

The EU also called on Israel to cease settlement expansion and the allocation of land for exclusive Israeli use.

The ceaseless expansion of illegal Israeli settlements in occupied Palestine has created a major obstacle for efforts to establish peace in the Middle East. Palestinians want the West Bank as part of their future independent state, with al-Quds as its capital.

More than half a million Israelis live in over 230 illegal settlements built since the 1967 Israeli occupation of the Palestinian territories of the West Bank and Jerusalem al-Quds.