TEHRAN, November 27- The U.S.-friendly Honduran president and his strongest rival both claimed victory in the Central American nation’s election amid confusion and increasing tension, with no official results more than eight hours after voting ended. 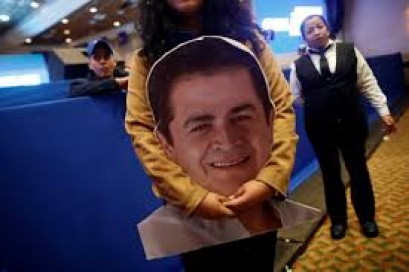 TEHRAN, Young Journalists Club (YJC) -Hernandez, a center-right U.S. ally, declared victory on shortly after an exit poll released by network Televicentro gave him 43.93 percent of Sunday’s vote, with Salvador Nasralla, who leads a broad left-right coalition called the Opposition Alliance Against the Dictatorship, at 34.70 percent.

Hours then passed, with no official results emerging. Nasralla, a flamboyant TV host, declared himself victorious early on Monday, with a 4.8 percent lead over Hernandez.

“I am the new president of Honduras,” Nasralla, 64, told cheering supporters at midnight, describing his margin as irreversible and calling on supporters to take to the streets to back him.

At the opposition leader’s side was former president Manuel Zelaya, who was ousted in a coup supported by Hernandez eight years ago after he also sought re-election. As coordinator and, many believe, the true power in the Alliance, Zelaya could be a major beneficiary if Nasralla wins.

A victory for Nasralla would be a major upset in the poor Central American nation, after polls showed Hernandez likely to easily win his divisive bid for a second term, made possible by a contentious 2015 decision by the Supreme Court.

It would be a blow for the United States, which sees Hernandez as a reliable ally in tackling drug trafficking, gangs and migration. The United States has longstanding military ties to Honduras and few ideological allies among the current crop of Central American presidents.

Honduran political commentators struggled to explain to viewers what was going on. “It might be true that Nasralla won, it might not be,” one newsreader said.

On Twitter, Hondurans vented their anger and worried that the silence form electoral authorities was a sign that something untoward was going on.

“They’re totally hiding the results from us,” said Astrid Valeria in a post on the social media platform.

Nasralla and his coalition accuse Hernandez of trying to become a dictator.

“We’ve overcome the fraud, there’s no doubt, and there’s no turning back the result. Triumph is guaranteed,” Nasralla said.

A non-traditional political figure who has benefited from his entertainment background to build support among those disenchanted by business-as-usual Honduran politics, Nasralla promises to put an end to years of violence, poverty and graft.

Nasralla says he will ask the United Nations to install an anti-graft body, similar to one operating in Guatemala, to probe and bring charges in corruption cases.

He would maintain the Military Police created by Hernandez but wants to start a community police force to work in violent slums. He would also continue firing corrupt national police officers, while hiring up to 25,000 new recruits.

Plans for the economy are vague, but the coalition has proposed lowering the sales tax and slashing a Hernandez-imposed corporate levy that has enraged the private sector.

Hernandez, 49, has been credited with lowering a sky-high murder rate, accelerating economic growth and cutting the deficit since he took office in 2014, but has also been hurt by accusations of ties to drug and graft-stained financing and claims he is plotting a power grab.

Voter Klenia Corea, 26, said she, her family and friends all supported Nasralla, citing a lack of jobs for young people and the president’s grip on law enforcement.