TEHRAN, November 30 - British Prime Minister Theresa May implored Saudi leaders to ease a blockade on Yemen to "avert a humanitarian catastrophe", her office said on Thursday, echoing urgent appeals from the United Nations. 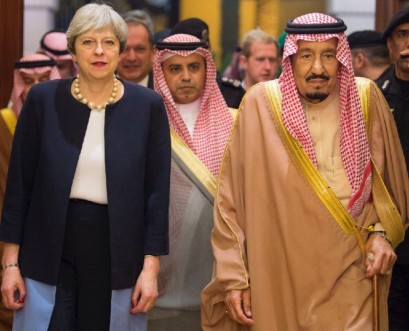 TEHRAN, Young Journalists Club (YJC) - May met both King Salman and Crown Prince Mohammed bin Salman on a brief visit to Riyadh late on Wednesday, with a worsening crisis in Yemen topping her agenda.

May had promised to raise concerns over Yemen where a military coalition led by Saudi Arabia has only partially lifted a crippling aid blockade.

"The prime minister made clear that the flow of commercial supplies... must be resumed if we are to avert a humanitarian catastrophe," May's office said.

"They agreed that steps needed to be taken as a matter of urgency to address this."

Saudi Arabia is Britain's largest trading partner in the Middle East, and London has signed off on more than £3.3 billion ($4.4 billion/3.7 billion euros) worth of arms sales to Riyadh since March 2015.

That was the month that Riyadh launched its intervention against Houthi Yemenis who still control the capital Sanaa and much of the north of the country.

The United Nations on Monday urged the Saudi-led coalition to do "much more" to ease the blockade impeding shipments of aid and fully reopen the key rebel-held port of Hodeida.

UN officials have warned that Yemen faces the risk of the "world's worst famine in many decades".