TEHRAN, February 7 - London police have inadvertently confirmed that Saudi Arabian Prince Mohammad bin Salman will visit the UK in March, igniting fresh calls from activists to have the royal arrested upon his arrival for alleged war crimes in Yemen. 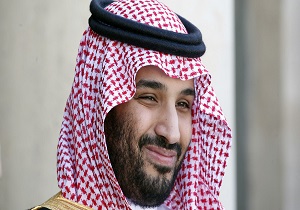 TEHRAN, Young Journalists Club (YJC) - A liaison officer from the Metropolitan Police contacted the London Campaign Against Arms Trade to check if the activist group would be planning any protests during March 7-9; the dates for the prince’s trip to the United Kingdom.

A coalition of human rights groups - which includes the Bahrain Institute for Rights and Democracy, the Campaign Against Arms Trade, and Human Rights for Yemen - have previously banded together to urge Prime Minister Theresa May to cancel the prince’s visit, but these calls appear to have fallen on deaf ears.

The activist groups argue that bin Salman has been the architect of the Saudi-led bombardment of Yemen, which has left more than 20 million dependent on humanitarian aid, and led to an outbreak of cholera that has affected nearly 1 million people since April.

Saudi Arabia is Britain’s largest arms importer, with licenses worth up to £1.12 billion ($1.5 billion), despite widespread concern that the kingdom is unlawfully using the weapons to target civilians in its air-bombing campaign against the Houthis in Yemen.

Lily Chamberlain of the Bahrain Institute for Rights and Democracy accused UK PM Theresa May of “prioritizing business and trade over the lives of Yemeni civilians.”

“She evidently would rather facilitate the continued arms trade than take basic actions to secure the human rights of the innocent people affected,” Chamberlain said.

Shadow foreign secretary Emily Thornberry has also called on the prime minister to use the UK’s diplomatic power to demand a stop to the bombings in Yemen. She has said that May needs to stop “bowing and scraping” to the Saudi royal.

"The British people will rightly wonder why the architect of Saudi Arabia's disastrous war in Yemen should be given the red-carpet treatment in Britain, while that war continues to rage, while Yemeni civilians continue to die from Saudi air strikes, and while millions of children continue to face starvation and disease,” Thornberry told the Middle East Eye.

The Labour MP added that the British public will question why Mohammad bin Salman is being welcomed into the United Kingdom despite “serious allegations" of war crimes.

Lawyers on behalf of activist group Human Rights for Yemen filed an application to the Westminster Magistrates’ Court and the Director of Public Prosecution (DPP) in January to demand a warrant for bin Salman’s arrest.

Human Rights for Yemen Director Kim Sharif said the group will continue to press ahead with legal proceedings. “We… are prepared to go to the highest courts to obtain justice for the victims of the illegal military intervention by the Saudi coalition in Yemen,” she told RT.

“The law is clear: there is jurisdiction to try anyone who commits war crimes anywhere in the world and there is no immunity for such crimes. Therefore, the arrest warrant has to be issued.”

Sharif also had a direct message for the crown prince: stop bombarding innocent people with bombs and lift the blockades, which have been imposed on Yemeni borders since November, preventing critical aid such as food and medical supplies from entering the war ravaged country.

“We demand that he stops the aerial bombardment against civilian targets and the illegal blockade which amounts to very serious war crimes and genocide,” she said. “130 children under five die per day due to the illegal blockade…. you are committing a holocaust against the people of Yemen and history will remember you as the Hitler of Arabia.

“We, the public of the UK, do not welcome his state visit due to the serious war crimes he has been committing against the people of Yemen,” she added.

Downing Street would not confirm the Saudi prince’s trip, with a press officer telling RT that “it’s not something we’d confirm this far in advance.”

The Saudi Arabian embassy has been approached for comment, but did not respond in time for this article’s publication.