TEHRAN, December 1 - European Union lawmakers have overwhelmingly voted in favor of a resolution that calls on the bloc to slap an arms embargo on Saudi Arabia, which is leading a brutal military campaign against Yemen. 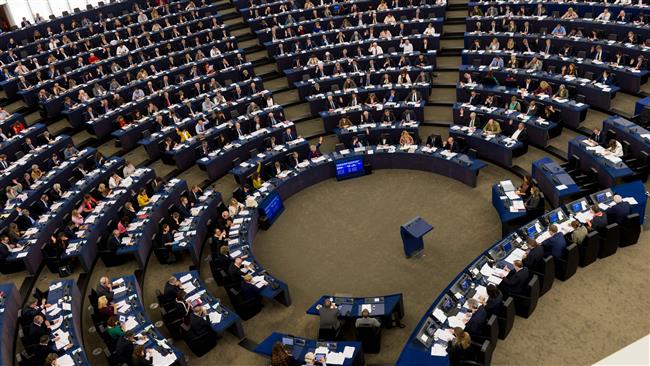 TEHRAN, Young Journalists Club (YJC) - The non-binding resolution, which was adopted in a nearly unanimous 539-13 vote on Thursday, condemned attacks against Yemeni civilians as “war crimes,” and slammed EU members for authorizing weapons sales to Saudi Arabia in breach of EU laws on arms export control.

The parliament “condemns in the strongest terms the ongoing violence in Yemen and all attacks against civilians and civilian infrastructure, which constitute war crimes,” the Members of the European Parliament (MEPs) said in their statement.

Referring to a similar resolution from February last year, the lawmakers called on EU foreign policy chief Federica Mogherini to launch an initiative to impose an EU arms embargo against the Riyadh regime “given the serious allegations of breaches of international humanitarian law by Saudi Arabia in Yemen.”

The UK, France, Germany and Greece are known to have struck major arms deals with Saudi Arabia in the course of the war, which began in 2015.

The United States was the second largest weapons provider to Riyadh with $5.9 billion followed by Britain at over $4 billion.

German weapons sales to Saudis have also risen over the past two years, jumping from $321 million in 2015 to over $630 million in 2016, according to Deutsche Welle.

Meanwhile, Greece has come under pressure over a $77 million arms deal with Saudi Arabia.

The MEPs also expressed “grave concern at the alarming deterioration of the humanitarian situation in Yemen,” referring to civilian deaths resulting from the years-long Saudi war and an outbreak of deadly diseases such as cholera and diphtheria.

More than 12,000 people have been killed since the onset of Saudi Arabia’s deadly campaign, which has the backing of a coalition of its vassal states.

Another 2,100 people have died of cholera since April as hospitals struggle to secure basic supplies across the country.

The war has destroyed much of Yemen’s infrastructure, with the impoverished country relying heavily on international aid to slow down the humanitarian crisis. Those efforts, however, have been impeded by a long-running Saudi blockade on key Yemeni ports and airport.

In their statement, the European lawmakers blasted the blockade and called for its “immediate” removal.

“The aerial and naval blockade imposed on Yemen by the coalition forces has been one of the main causes of the ongoing humanitarian catastrophe; whereas this blockade has restricted and disrupted the import and export of food, fuel and medical supplies, as well as humanitarian aid,” the statement added.

The statement called on Mogherini to “urgently propose an integrated EU strategy for Yemen and to make a renewed push for a Yemeni peace initiative under the auspices of the UN.”