Comey hopes US will have more ethical leadership in 2018

TEHRAN, January 2 -In a veiled denunciation of US President Donald Trump whose first year in office was embroiled in controversies, former FBI Director James Comey has said he hopes the United States will have more "ethical leadership" in 2018. 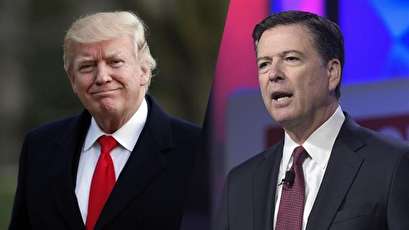 TEHRAN, Young Journalists Club (YJC) -In a veiled denunciation of US President Donald Trump whose first year in office was embroiled in controversies, former FBI Director James Comey has said he hopes the United States will have more "ethical leadership" in 2018.

"Happy New Year, everybody,” he added.

Trump fired the FBI director in May citing Comey's investigation into alleged links between his presidential campaign and Russian interference in the election, as well as Comey's alleged protection of former Democratic presidential nominee Hillary Clinton.

The former FBI chief was accused of exonerating Clinton of criminal charges regarding her personal email.

In 2017, Trump created many controversies, both at home and abroad. He went into 2018 with the lowest approval ratings of any modern first-year US president.

Internationally, concerns are growing about Trump's leadership style and unpredictability.

Retired US admiral and former chairman of the Joint Chiefs of Staff, Mike Mullen, said on Sunday that the disruptive nature of Trump's presidency has created "an incredibly dangerous climate."

"We're actually closer, in my view, to a nuclear war with North Korea and in that region than we have ever been," he said.

In a series of New Year's Eve tweets on Sunday, Trump touted his administration’s accomplishments but some analysts are suggesting that the Republican politician’s first year in the White House was a complete failure.

“By nearly all measures, Trump is a failure his first year. Except for his signature welfare for the uber-wealthy tax reform bill, he has no legislative history to date. Much of what he has accomplished has been through presidential fiat, his executive orders,” Myles Hoenig, a former Green Party candidate for Congress, told Press TV.

“He has proven himself to be a lot less than what his publicists -- and he -- have been proclaiming for decades. The fantastic deal maker failed in nearly every legislative venture he attempted, until the welfare bill for his Mar a Lago patrons,” the analyst said.

“He failed at repealing Obamacare, building a wall and having Mexico pay for it, or improving the economy, except that those with the economic power believe the economy is doing well. He was successful in doing all things negative that he promised,” he stated.