Trump seeking to stop release of book criticizing his administration

TEHRAN, January 5 - The Trump administration has threatened Steve Bannon, a former White House chief strategist, with legal action over his damaging allegations against the president and his family. 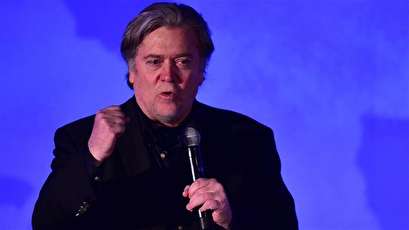 TEHRAN, Young Journalists Club (YJC) -The Trump administration has threatened Steve Bannon, a former White House chief strategist, with legal action over his damaging allegations against the president and his family.

President Donald Trump’s attorney Charles Harder sent a cease-and-desist letter Wednesday night to Bannon, demanding that he stop making the disparaging comments, which are included in a book named, "Fire and Fury: Inside the Trump White House."

The letter came after excerpts from the book written by Michael Wolff, were made public earlier on Wednesday.

It cites Bannon as describing a 2016 meeting between Trump's son and a Russian lawyer as "treasonous" and "unpatriotic."

The meeting was held in Trump Tower in New York in which a Russian lawyer was said to be offering damaging information about Democratic presidential candidate Hillary Clinton.

Trump blasted Bannon for his criticism, saying he has “lost his mind” after losing his White House position.

The book was set to be released next week by publisher Henry Holt and Co, but the publishing house announced that "due to unprecedented demand," it would release the book on Friday morning.

White House spokeswoman Sarah Huckabee Sanders called the book "some trash" that came from "an author that no one had ever heard of until today."

In response to the book controversy, Bannon, in an interview with Breitbart News, called Trump a "great man" and promised to continue his support for the president's agenda.

On Thursday, Trump told reporters, "He called me a great man last night so he obviously changed his tune pretty quick."