TEHRAN, February 7 -Former White House strategist, Steve Bannon, will reportedly refuse to testify before the intelligence committee of the US House of Representatives on Tuesday despite a bipartisan congressional subpoena requiring him to appear for a probe of alleged ties between Moscow and Washington in the US 2016 presidential campaign. 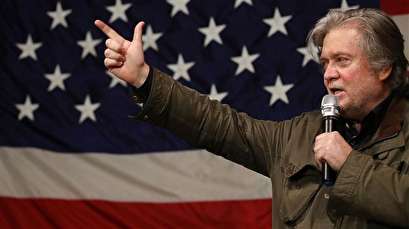 TEHRAN, Young Journalists Club (YJC) -Former White House strategist, Steve Bannon, will reportedly refuse to testify before the intelligence committee of the US House of Representatives on Tuesday despite a bipartisan congressional subpoena requiring him to appear for a probe of alleged ties between Moscow and Washington in the US 2016 presidential campaign.

Two sources familiar with the case said a day earlier that Bannon would not testify due to a lack of agreement between White House attorneys and the Intelligence Committee over the scope of the panel's questioning.

One of the sources, speaking on condition of anonymity, said the White House had not authorized Bannon to answer committee questions.

Another source said that Bannon would instead answer next week all the questions set to be asked by US Justice Department's Special Counsel Robert Mueller as part of the investigation.

The House Intelligence Committee confirmed on Tuesday it was giving Bannon another week to comply with its subpoena issued by Mueller’s office.

"The House Intelligence Committee's interview with Stephen Bannon has been postponed at the Committee's initiative until next week," Emily Hytha, spokeswoman for the committee's Russia probe, said in a statement. "We look forward to having him before the Committee once we can assure that he will be able to thoroughly answer all our questions without concerns regarding the scope of executive privilege."

This is the third time the committee has had to delay Bannon's testimony after his initial appearance last month.

In a previous appearance on January 16, the former White House strategist declined to answer questions about his time in US President Donald Trump’s administration or the post-election presidential transition.

Calling Bannon's failure to testify "unacceptable," top Democrat on the House Intelligence Committee, Adam Schiff, said that "should Bannon maintain his refusal to return and testify fully to all questions, the committee should begin contempt proceedings to compel his testimony.”

The US president said recently that he looked forward to answering Mueller's questions under oath.

US intelligence agencies have concluded that Russia tried to help Trump win the election by hacking and releasing emails damaging to his Democratic opponent, Hillary Clinton. Mueller is looking into whether there were any links between the Trump campaign and Russian operatives.

The White House and the Kremlin have both denied the allegations.

According to a national opinion poll in the US, the majority of Americans believed that the incumbent president had tried to derail or obstruct Mueller's probe into Russia's election interference.

The survey conducted by Quinnipiac University found that just over half of likely voters, 53 percent, were confident about Trump’s attempt to obstruct or derail the federal probe, compared to 41 percent who said the US president had no interference.

The opinion poll also showed that views over the legitimacy of Mueller's probe were deeply divided along partisan lines.

Half of voters (50 percent) said the investigation was legitimate, compared to 42 percent who called it a "political witch hunt," a description repeatedly used by Trump.

The Tuesday poll was carried out among 1,333 voters nationwide between February 2 and 5 via landlines and cellphones with a margin of error of 3.3 percentage points.