UNICEF: Over 5,000 kids killed by Saudi war on Yemen

TEHRAN, January 17 -Over 5,000 children have been killed by Saudi Arabia's war on Yemen since it began in March 2015, says a report by the UN children's agency. 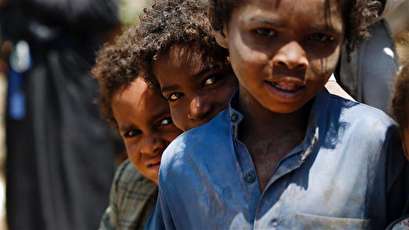 TEHRAN, Young Journalists Club (YJC) -Over 5,000 children have been killed by Saudi Arabia's war on Yemen since it began in March 2015, says a report by the UN children's agency.

The report published by UNICEF on Tuesday, noted that the Saudi war had killed "an average of five children every day since March 2015."

It added that at least two million Yemeni children were also out of school, and that 400,000 were facing malnourishment.

Over three million children were born since the onslaught began, all of them "scarred by years of violence, displacement, disease, poverty, under-nutrition and a lack of access to basic services."

"An entire generation of children in Yemen is growing up knowing nothing but violence... Children in Yemen are suffering the devastating consequences of a war that is not of their making," said UNICEF's representative in Yemen, Meritxell Relano.

"Malnutrition and disease are rampant as basic services collapse...Those who survive are likely to carry the physical and psychological scars of conflict for the rest of their lives," she added.

Earlier in the day, The UN announced that the number of the Yemenis who are dependent on assistance has risen to 22.2 million.