TEHRAN, January 21 - US President Donald Trump has called on his South Korean counterpart Moon Jae-in to publicly give him credit for creating the atmosphere for rival North Korea to seek talks and détente with the South in efforts to take part in the Winter Olympics due to be held in South Korean city of PyeongChang next month. 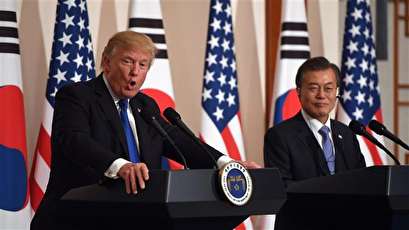 TEHRAN, Young Journalists Club (YJC) -US President Donald Trump has called on his South Korean counterpart Moon Jae-in to publicly give him credit for creating the atmosphere for rival North Korea to seek talks and détente with the South in efforts to take part in the Winter Olympics due to be held in South Korean city of PyeongChang next month.

In a January 4 phone conversation, in which Moon briefed the US president on the plans for talks with Pyongyang, Trump asked the South Korean leader to publicly recognize his policies for setting the ground for the talks, US-based daily The Washington Post reported Saturday citing “people familiar with the conversation” that spoke on condition of anonymity.

Later that night, the daily added, Trump tweeted that the talks would not be happening “if I wasn’t firm, strong and willing to commit our total ‘might’ against the North.”

Moon indeed confirmed in a news conference six days later that Trump deserved “huge credit” for the unprecedented diplomatic overture by the North.

According to the report, as South Korea presses ahead with efforts to host a large North Korean delegation in the Winter Olympics in February, Trump “is claiming — and getting — most of the credit for the sudden burst of Olympics-related diplomacy between the two Koreas.”

Citing a former official, however, the daily added that Seoul is willingly agreeing to Pyongyang’s demands, adding that “Moon is trying to manipulate Trump into effectively undermining his own policy” of exerting pressure on North Korea.

“Kim Jong Un is setting the agenda here,” said a former official who spoke on condition of anonymity. “His purpose is to use these talks to show the world that he’s okay and to make the sanctions effort lose steam.”

The daily then underlined that “Moon has repeatedly made overtures to North Korea but Kim consistently rebuffed them all” until the New Year’s Day, when the North Korean leader called for “detente” with the South just weeks after declaring that his nuclear weapons program was complete.

This led to a flurry of activity in the South, it added, “including getting Trump to agree in that January 4 phone call to postpone joint military drills until after the Olympics, to avoid antagonizing North Korea.”

The report further pointed out that the concessions to Pyongyang have enraged many South Koreans, “with some publicly wondering whether they’re the PyeongChang or the Pyongyang games.”

It also pointed to a Realmeter poll published on Thursday, which found that half of respondents thought the two Koreas should march separately under their own flags, while 40 percent backed an agreement last week that they should march together under a flag showing a unified Korean Peninsula.

This is while high-ranking officials from the North are due in South Korea as part of the Olympic delegation — potentially including “North Korea’s de facto No. 2, Choe Ryong Hae,” the daily added, noting that Moon would hope to meet with him if he comes to the country.

The Moon administration “is trying to build trust with the North in the hope this will lead to talks about its nuclear weapons program.”

Such a prospect “has gained extra urgency,” it noted, as Trump and his aides “have increasingly talked about using military options to teach North Korea the error of its ways.”

It then cited South Korea’s hawkish national security adviser Chun Yung-woo as saying that such short-term reprieve could lead to longer term issues.

“Once all the diplomatic options have been exhausted,” Chun said, “Moon will have even fewer options left for dealing with North Korea.”