TEHRAN, February 14 -US President Donald Trump has threatened to impose sanctions on China while vowing to scrap a free trade deal with South Korea. 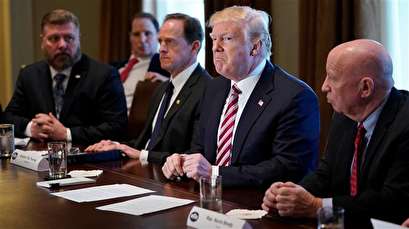 His threat of action against the two major Asian trading partners came on Tuesday in a speech to a group of Republican and Democratic lawmakers at the White House.

Trump accused Beijing of undermining US steel and aluminum industries, saying he was “considering all options,” including tariffs and quotas.

This comes after Trump received two Commerce Department reports about alleged Chinese subsidies for steel and aluminum exports, materials that are essential for industries such as construction, autos and the like.

Meanwhile, China, which produces nearly half of the world’s steel, is accused of flooding the market in order to keep its economy robust at home.

“I will make a decision that reflects the best interests of the United States, including the need to address overproduction in China and other countries,” Trump said.

Although the president has another two months to make a decision on possible penalizing action, he strongly indicated that he wants to punish Beijing.

Experts, however, say that any such action will prompt China to do the same, raising the specter of a trade war between the world’s two largest economies.

Trump is under pressure at home as he has not been able to deliver on his campaign promise of being a champion of America’s Rust Belt.

Also, he has done nothing to fix the national trade deficit, which has widened even further during his first year in office, up 12 percent to $566 billion.

On Tuesday, there were members among the group who expressed support for the president, but also others who warned that action against China could increase prices and hurt US manufacturing outside the steel and aluminum sectors.

“Mr. President, I think we do need to be careful here, that we don’t start a reciprocal battle on tariffs,” said Republican Senator Roy Blunt.

Trump also took a shot at South Korea amid anger at signs of improvement in relations between Seoul and Pyongyang.

He described the 2012 free trade deal with South Korea as “a disaster,” saying that Washington would renegotiate a “fair deal” or scrap it altogether.

The Trump administration began talks to renegotiate the United States-Korea (KORUS) trade agreement in July, asserting that it was lopsided as America’s bilateral trade deficit had ballooned under it.

“We have a very, very bad trade deal with Korea,” Trump said. “For us it produced nothing but losses.”