TEHRAN, February 5 - Authorities in Afrin have called on global powers to halt Turkey's assault on the region as thousands of people take to the streets in the Syrian city in condemnation of Ankara's incursion. 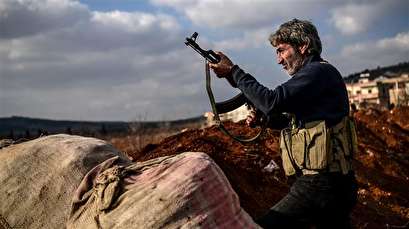 TEHRAN, Young Journalists Club (YJC) -Authorities in Afrin have called on global powers to halt Turkey's assault on the region as thousands of people take to the streets in the Syrian city in condemnation of Ankara's incursion.

“We ask the Russian federation in particular to rescind its support for the Turkish state’s terrorism against the people of Afrin,” said Afrin’s local administration — the semi-autonomous government in power since 2013 - in a statement released on Sunday.

“It bears responsibility for the massacres the fascist Turkish state is carrying out against innocent civilians,” it added. The statement referred to Russia's move of withdrawing its troops who were stationed in Afrin when Turkey launched its assault.

It also called on the United States, EU, United Nations Security Council and the US-led coalition to “immediately intervene to stop Turkey’s aggression.”

American troops have no presence in and around Afrin but they are present in Manbij and east of the Euphrates, where they have purportedly assisted the YPG in the fight against the Daesh Takfiri terrorist group.

The YPG forms the backbone of the Syrian Democratic Forces (SDF), a US-backed anti-Damascus militant group.

Meanwhile, thousands of people have joined a demonstration in downtown Afrin to protest Turkey's invasion.

“We’re holding the whole world responsible because we fought terrorism on behalf of everyone, but today the world agreed to kill Syrians,” said a protester.

Other protesters held olive branches, a symbol of Afrin which is known for its plentiful olive groves but also name Turkey has dubbed its offensive.

“They named their attack ‘Olive Branch’. It’s a thorn in their hand, but in our hands, it’s a gun,” said a protester.

According to the so-called Syrian Observatory for Human Rights, so far over 68 civilians, including 21 children, have been killed in Turkish shelling.