TEHRAN, February 6 -People close to Hillary Clinton were feeding information to Christopher Steele who compiled the Trump dossier on Trump's alleged connections with Russia, according to a criminal referral filed by Republican senators. 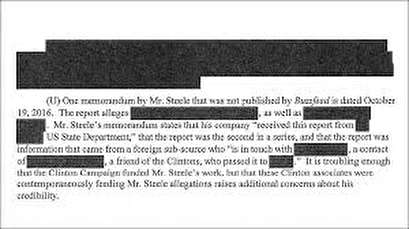 TEHRAN, Young Journalists Club (YJC) -People close to Hillary Clinton were feeding information to Christopher Steele who compiled the Trump dossier on Trump's alleged connections with Russia, according to a criminal referral filed by Republican senators.

A newly-released document from the Senate Judiciary Committee says Steele wrote an additional memo, besides the controversial dossier, using information that came from the Clinton campaign.

The newly-released memorandum is an unclassified and heavily-redacted version of the criminal referral targeting Steele, filed on January 4 by Republican Senators Chuck Grassley and Lindsey Graham. It is addressed to Deputy Attorney General Rod Rosenstein and Director of the FBI Christopher Wray who Grassley and Graham are asking to investigate Steele.

The report reveals coordination between the extended Clinton circle and the Obama administration in an attempt to source damaging information about then-candidate Trump.

Steele was hired by private firm Fusion GPS in June 2016 to gather information on alleged links between Trump and Russia. His dossier, parts of which were leaked to the media before the elections, was the basis for the warrant to spy on Trump adviser, Carter Page, according to the memo released on Friday.

“It is troubling enough that the Clinton Campaign funded Mr. Steele’s work, but that these Clinton associates were contemporaneously feeding Mr. Steele allegations raises additional concerns about his credibility,” the report states.

“It appears that either Steele lied to the FBI and the British court, or that the classified documents reviewed by the Committee contain materially false statements,” the report states.

On January 4, Senators Grassley and Graham referred Steele to the FBI for further investigation after reviewing Justice Department documents that conflicted with Steele’s sworn court statements about the distribution of his research.
“Seeking transparency and cooperation should not be this challenging.  The government should not be blotting out information that it admits isn’t secret, and it should not take dramatic steps by Congress and the White House to get answers that the American people are demanding. There are still many questions that can only be answered by complete transparency.  That means declassifying as much of the underlying documents as possible,” Grassley said in the release accompanying the document.

Leaked to Buzzfeed in January 2017, Steele’s dossier contains unverified allegations that Russia holds information on Trump which it's using to blackmail the US president. It further alleges sustained and close working contacts between Trump aides and Kremlin representatives, with Russia “feeding Trump and his team valuable intelligence on his opponents” for years prior to 2016. The allegations have not been proven.

As alleged in the 'Nunes memo', this dossier “formed an essential part” of the FISA probable cause order obtained by the FBI from the Foreign Intelligence Surveillance Court (FISC) in 2016 to spy on Trump adviser Carter Page. The warrant was extended three times, also on the basis of the Steele dossier.