TEHRAN, February 10- US President Donald Trump has blocked the release of a classified Democratic memo which rebuts a Republican document alleging bias and misconduct in investigation of the president’s ties to Russia. 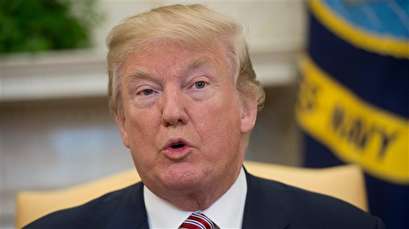 TEHRAN, Young Journalists Club (YJC) - US President Donald Trump has blocked the release of a classified Democratic memo which rebuts a Republican document alleging bias and misconduct in investigation of the president’s ties to Russia.

Last week, Trump allowed the release of a memo from the GOP and House Intelligence Committee Chairman Devin Nunes that accuses the Federal Bureau of Investigation (FBI) and the Department of Justice (DOJ) of abusing power in investigation of the alleged Washington-Moscow links in the 2016 presidential elections.

The Republican memo alleges that law enforcement officials used information in their application for a warrant to wiretap former Trump campaign adviser Carter Page, naming the senior FBI and DOJ officials who had approved the warrant.

Now, the White House refuses to release a rebuttal memo by Democrats, arguing that it contains “numerous properly classified and sensitive passages.”

The DOJ had identified portions of the memo that “would create especially significant concerns for the national security and law enforcement interests” of the country, said White House counsel Donald McGahn.

The president would again consider the release of the memo if the committee revised it to “mitigate the risks,” McGahn wrote in a letter to Nunes.

The White House also released a letter from FBI Director Christopher Wray and Rod Rosenstein, the No. 2 Justice Department official, expressing concerns about the memo’s release “in light of longstanding principles regarding the protection of intelligence sources and methods, ongoing investigations, and other similar sensitive information.”

“The president’s double standard when it comes to transparency is appalling,” he said. “The rationale for releasing the Nunes memo, transparency, vanishes when it could show information that’s harmful to him.”

US intelligence agencies claim Russia-linked hackers provided WikiLeaks with damaging information -- in the form of thousands of hacked emails -- about Clinton to skew the 2016 presidential election in favor of Trump.