TEHRAN, February 22 - Hundreds of Syrians have held a demonstration in Afrin to celebrate the arrival of pro-government fighters in the northwestern city that has been the target of Turkish attacks. 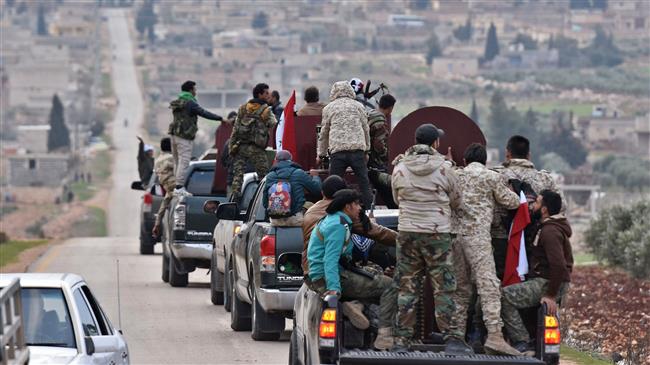 The protesters reaffirmed that Afrin is an integral part of the Syrian territory and that they will not allow Turkish forces as well as terrorist groups to desecrate their homeland.

They further stressed that the aggressors would be defeated.

Earlier on Thursday, the Syrian daily al-Watan reported that some 500 Syrian popular forces had entered the Afrin region since Tuesday.

The pro-Damascus fighters will defend the Syrian city against Turkey's military operation, it added.

The Kurdish People’s Protection Units (YPG) confirmed that hundreds of pro-government fighters had been deployed on the frontlines in Afrin to help counter a Turkish offensive.

"Groups aligned to the Syrian army came to Afrin, but not in the quantity or capacity to stop the Turkish occupation," YPG spokesman Nouri Mahmoud told Reuters. "The Syrian army must fulfill its duty... to protect Syria's borders."

The pro-Damascus demonstration in Afrin came one day after Ankara's warning to consider any group coming to the help of the Kurds in the Syrian city as a “legitimate target” for the Turkish military.

Turkish presidential spokesman Ibrahim Kalin said Wednesday that any force in Afrin, including the Syrian government, would be targeted by Turkish troops if they assist the YPG.

Turkey launched the so-called Operation Olive Branch in Syria's Afrin on January 20 in a bid to eliminate the YPG, which Ankara views as a terror organization and the Syrian branch of the outlawed Kurdish Workers Party (PKK).

Syria has condemned the Turkish campaign as an act of aggression, which is meant to support terror outfits operating inside the conflict-plagued Arab country.

Assad said the "brutal Turkish aggression cannot be separated from the Turkish regime's policy from the first day of Syria's crisis, which was essentially built on supporting terrorism and terrorist organizations, whatever their names."