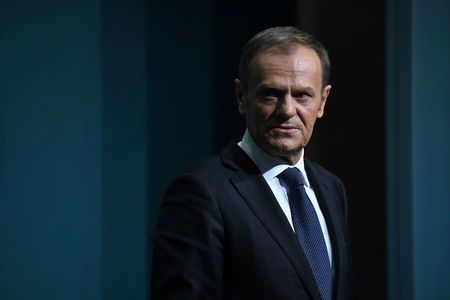 TEHRAN,Young Journalists Club (YJC) - In offering "full solidarity" with their outgoing fellow EU member state, however, they will wait to see what May herself does to penalize Moscow before considering their own common measures against a powerful eastern neighbor which has long succeeded in sharply dividing opinion within the bloc.

Tusk's echoing of May's accusations against the Kremlin -- he called the poisoning of a former Russian double agent a "brutal attack inspired most likely by Moscow" -- was among the most direct criticisms of the Kremlin among EU leaders.

But the former Polish prime minister, asked by reporters what the Union might do about it, made clear that the EU would wait for a lead from Britain before responding: "We should wait for some kind of suggestions from London to decide on our common actions," Tusk said during a news conference in Helsinki.

An hour later, May announced the expulsion of 23 Russian diplomats, some freezes on Russian state assets and a reduced official presence at the soccer World Cup -- measures that do not create immediate pressure for EU allies to follow suit.

The European Union has imposed an array of personal and trade sanctions on Russia and Russian officials since Moscow seized Crimea from Ukraine in 2014. Reaching unanimity needed to roll those over twice a year has proved difficult, however, with several countries, including Italy, Greece and Hungary, arguing that they are costly, ineffectual and maybe counterproductive.

With new French President Emmanuel Macron also pursuing a policy of seeking to coax Moscow into better relations, diplomats say the EU will not find it easy to rally behind a significant expansion of economic sanctions. Macron did not mention Russia in condemning the attack on Tuesday.

Nonetheless, outrage at the use on EU soil of a deadly nerve agent developed by the Soviet Union which has left ex-spy Sergei Skripal, his daughter and a British policeman gravely ill has galvanized opinion and European governments are looking to Britain to provide more detail on why it blames Russia.

NATO, the military alliance binding most EU countries with the United States, heard evidence on Wednesday from Britain and then called on Russia to explain what it called the "first offensive use" of a nerve agent on NATO territory since the organization was founded to counter Soviet threats in 1949.

Moscow has dismissed any suggestion of Russian involvement.